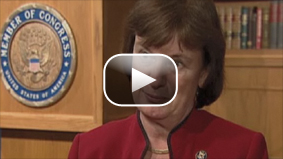 I spent part of yesterday on Capitol Hill talking to two Democrats about how some in the party are getting nervous about the Obama Administration’s plans for the economy. Congresswoman Carol Shea-Porter from New Hampshire passed along the message she gave directly to Treasury Secretary Tim Geithner: “Hurry. Please hurry. Because people are waiting and they are hurting and they need the help now." She says she was simply relaying the message she’s getting from constituents at town meetings back in her home district.

House Speaker Nancy Pelosi urged Democrats to stay on message. Her message: confidence. But she also acknowledged what top economists have told her, another stimulus package may be necessary. Some budget hawks in her own party don’t like the sound of that. North Dakota’s Earl Pomeroy told me, “I think if we were to have a vote on a stimulus package, it would probably fail.”