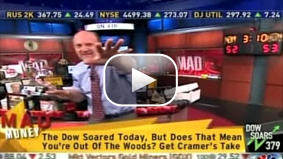 The ongoing grudge match between Daily Show host John Stewart, and CNBC's Jim Cramer. All the buzz is only encouraging the folks at Comedy Central.

Some people have some serious questions for Jim Cramer – about things he said – the advice he gave – and the role he might have played in manipulating the markets.