"If He Hits You Once, He Will Do It Again" 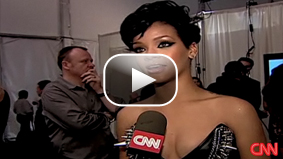 Chris Brown's arrest for allegedly beating his girlfriend Rihanna has sparked a nationwide conversation on domestic violence. In fact, Oprah Winfrey was so moved by the story she dedicated a whole hour to the subject on her show yesterday.

Oprah has not been shy about offering her advice to singer Rihanna, and women who are in abusive situations. "If you have been abused once, she says, it will not be the last time." Oprah devoted a whole hour to the subject on her show yesterday. We wanted to talk about it with a clinical psychologist. Dr. Jeff Gardere joined us live.

The search resumes for survivors of a helicopter crash off the coast of Newfoundland. 16-people are still missing. The chopper was carrying oil workers to an off-shore platform Thursday when it ditched and sank in the frigid North Atlantic. One man was rescued and one body has been recovered.

The Los Angeles Attorney General will hold a press conference on charges Anna Smith's former companion and lawyer provided highly addictive drugs to the late model. Howard K. Stern and two doctors charged with *eight* felonies. It all comes more than two years after Smith died from an accidental overdose of prescription drugs.

END_OF_DOCUMENT_TOKEN_TO_BE_REPLACED

Hey everyone. Happy Friday the 13th! Here's what's in store for today's show.

@stepville @MSNBC Notwithstanding your excellent book, this conversation about struggle, poverty and housing insecuŌĆtwitter.com/i/web/status/1ŌĆ”bX
alivelshi

7:37 pm ET September 27, 2021 RETWEET
RT @stepville: ICYMI: one of my favorite interviews ever with @AliVelshi on @MSNBC !! Thank you again for the opportunity to advocate and hŌĆ”
alivelshi

7:35 pm ET September 27, 2021 RETWEET
RT @Sifill_LDF: Spin. This wasnŌĆÖt abt money. It was about accountability for police violence. And whether there was enough courage among ReŌĆ”
alivelshi

4:20 pm ET September 26, 2021 RETWEET
RT @MSNBC: "The results of this fraudit don't matter because it was illegitimate from the start. To say that this was a win for Biden or aŌĆ”
alivelshi