What's in a Name? A lot when it's a "Trump" property 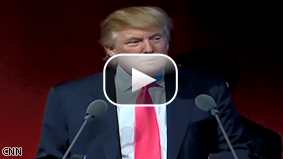 Donald Trump is being sued by a group of real estate investors for fraud, among other claims.

When Guadalupe Mendoza first heard the news that Donald Trump was developing a new resort in Baja California back in 2006, she chalked it up to rumor. She knew Baja had been booming – but she was still skeptical it had attracted the attention of one of the most successful real estate tycoons in the world.

But Mendoza of Downey, California, was intrigued, so she did some investigating and says she discovered the buzz was true: that the Trump Organization had partnered with Irongate, a Los Angeles-based real estate development and investment company, to build a luxury oceanfront resort at Punta Bandera in Baja.

After researching the project for 5 months, Mendoza decided investing in the Trump Ocean Resort Baja was an opportunity she couldn't pass up. She says she and her sister bought a 2-bedroom unit at the yet-to-be-built hotel-condo resort for $666,900 in December 2006.

"I thought, what an awesome opportunity to invest with a multi-millionaire like Trump," Mendoza said. "With everything that's going on, I know – I know – I can't go wrong with this."

But something did go wrong. In December, PB Impulsores, a Mexican developer, wrote to Mendoza and other buyers, saying Trump had licensed his name and was not an investor.

The Mexican company said the developers weren't able to raise enough money to fund the project to completion, and in February PB Impulsores notified buyers they were shutting it down.

"They told us, 'We've got no money to refund your deposit,'" Mendoza says.

Now Mendoza, along with a group of 68 other investors, is suing Trump in Los Angeles superior court for fraud, negligence and unjust enrichment – among other claims.

The attorneys representing the Baja buyers say their clients bought a total of 71 units at the hotel and lost an estimated total of $14 million to $20 million.

"They've been duped," says Daniel King, one of the attorneys representing the buyers in their suit against Trump, his children Ivanka and Donald Trump, Jr., developer Irongate, and the marketing agency that promoted the project. "People were going into this believing they were dealing with Donald Trump."

But the Trump Organization disputes those charges, saying it was involved in the Trump Ocean Baja Resort in name only.

According to the statement, the Trump Organization licensed the "Trump" name to the developer – but terminated that licensing agreement in January of this year because "the developer did not comply with certain terms of the license agreement, including the deadlines to obtain construction financing and begin construction."

Mendoza and King say the first they and other clients heard of the licensing agreement was in late December 2008.

The lawsuit alleges PB Impulsores is a "shell entity" for Irongate.

The web site that touted the project, http://www.trump-baja.com, is no longer operational.

Repeated calls made to Irongate for comment were not returned.

The promotional materials investors, prospective buyers and the media had been receiving for over two years were plastered with Trump's name, image and personal messages from the Donald. Some materials described Trump and Irongate as "co-developers" or "partners." Many proclaimed the new Baja resort would exhibit the luxury and exclusivity that Trump properties are known for. And the materials showed Trump's children Ivanka Trump and Donald Trump, Jr. appearing at sales events to promote the resort – and purchase units for themselves.

Mendoza and her sister made $200,000 in payments for the Trump Baja property before the project collapsed.

She says they had planned to use the resort unit as a vacation home that they could rent out when their family wasn't staying there – and hopefully one day resell to help pay for her two children to go to college.

"I was convinced he was directly involved in financing and developing the project," Mendoza says of Trump.