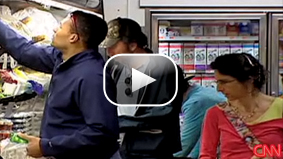 CNN's Jason Carroll reports on why grocery prices are on the rise and what consumers are doing to eat for cheap.

If you gone to the store lately and wondered why in this weakening economy the prices for things like cereal or bread haven't gone down..

We've got some answers for you.

The "Discovery" astronauts about to begin their first full day at the International Space Station. The crew is scheduled for a wake-up call at 8:43 am eastern. They're preparing for their first spacewalk on Thursday.

President Obama travels to Southern California this afternoon. He'll hold a town hall meeting in Santa Ana on his economic recovery plan... Then head to Los Angeles. The President is scheduled to make a guest appearance on "The Tonight Show" with Jay Leno Thursday before returning to Washington.

And in Washington... Vice President Joe Biden hosts a conference of community leaders from across the country. The group will discuss the best ways of spending the stimulus money. There will be a working dinner tonight at 7 o'clock eastern. And, meetings are scheduled throughout the day tomorrow.

We’re continuing along the Road to Rescue this morning... Some of the biggest names and newsmakers in the economic crisis will join us.

Here's are some of the big stories we're following for you today: END_OF_DOCUMENT_TOKEN_TO_BE_REPLACED