Thursday morning of AM's Road to Rescue special coverage brought answers to some of your biggest questions. First off, thanks to some great digging by our congressional correspondent Dana Bash we got some answers about just who in Congress and the Obama Adminstration was involved in legislation that ended up allowing the AIG bonuses. Check out her reporting on the issue here.

Also we started the morning with the news that the Federal Reserve bought up a trillion dollars worth of mortgage backed securities.  One effect of that: lowered mortgage interest rates for you.  Our personal finance editor Gerri Willis took your questions on the news.

Christine and I have quick little discussions in the breaks about all of the hot topics we are covering. We talked about whether all of the populist outrage over AIG is taking away from the larger issue of where our trillions of tax-payer dollars have gone and are continuing to go through the bailouts and other attempts to stabilize the economy. We are digging more into that Friday morning. Hope to see you then!

Here’s your daily recap of the best feedback we got from YOU on the blog, Facebook, Twitter, Email and our viewer hotline 1-877-MY-AM-FIX. Continue the conversation below. And remember, keep it brief, and keep it clean. Thanks!

American Morning viewers flooded the emails with financial comments and questions regarding mortgages, unemployment, and student loans. Viewers praised CNN for helping to “educate consumers on credit related issues.” Others vented their anger at politicians for what they termed “unbelievably poor jobs they have been doing for the last few years.”

What are your thoughts on our viewers’ comments? Should politicians take a pay cut for poor performance or for “not reading the final draft [of a bill] before voting?”

END_OF_DOCUMENT_TOKEN_TO_BE_REPLACED

The sound and fury from the AIG bonus story doesn’t cease. The underwater volcano eruption from Tonga overnight was matched only by the smoke and ash spewing from a House chamber yesterday as members pounded AIG CEO Edward Liddy. It didn’t seem to matter that Liddy came on board only last fall and has a one dollar a year salary.

A few members thanked him for his service, but most blamed him for the bonus controversy. In the midst of all of it, murky timelines of who knew what about the bonuses, when. And a mystery surrounding who finagled language at the last minute during the crafting of the stimulus bill, language that essentially paved the way for AIG to pay the bonuses. (Thanks to CNN’s Dana Bash, we now know Sen. Chris Dodd was responsible for that. At the urging, he says, of the Obama Treasury department.)

END_OF_DOCUMENT_TOKEN_TO_BE_REPLACED 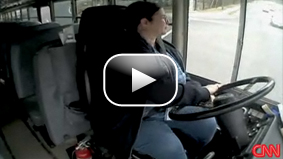 CNN's Carol Costello reports on how retirement is no longer an option for some seniors.

With the current state of the economy, more and more people are being forced out of retirement. Right now the number of people over 65 working is on the rise. The Wall Street Journal reporting nearly a three percent spike over the last decade.

Eva Coffey, 60, was an accountant/comptroller for various companies most of her life. She retired 7 years ago, but after losing about 50% of her Roth IRA, and half the value of two investment properties, she's back at work again – as a school bus driver for $17/hour. But that's only part-time, about 15 hours a week and she needs more to make ends meet.

She and her husband have also had to shelve the idea of financing their retirement by selling their properties in this housing market. Coffey's husband works for the government and has put off planned retirement because of the economy.

The young and the jobless 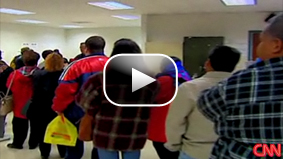 CNN's Jason Carroll reports on how young people are coping with a tough job market.

Nearly 3.7 million young people are now out of work.

Before the recession hit there were not enough jobs to go around.

Now that we're in a recession the younger the worker the more likely that worker could get pushed out of the job market. 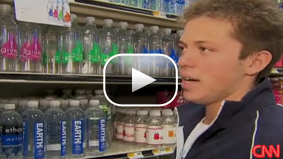 CNN's Jim Acosta reports on a college student who doubles as a CEO.

Twenty year old sophomore Ben Lewis is busy these days. When he's not studying for mid term exams he is traveling cross country pitching his own bottled water that he says has the power to change the world.

The latest product from corporate America comes from a baby faced University of Pennsylvania sophomore who shares a room with three other roommates. Today he is in Anaheim, California at a health foods trade show pitching his Give water brand to the big wigs from the likes of Pepsi and Coke.

The bottles come in different colors and a dime from each bottle sold goes to charity. Orange helps the fight against muscular disorders, pink is for breast cancer research, green goes to the environment and blue helps children fight AIDS.