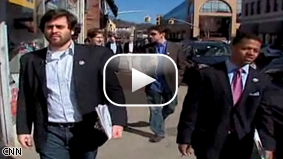 President Obama won the election with the help of a vast network of grassroots supporters who organized online and then took their message to the streets.

Now the President is calling on his volunteers once again... to sell more than a campaign.

RT @NCDCgov: During the dry season, there is usually an increase in #Lassafever cases as a result of ecological factors. #Lassafever is pr…
cnnAM

4:14 am ET January 22, 2020 RETWEET
RT @Zikarr_: With the #coronavirus outbreak in China, Ebola in DRC and Lassa fever in Ondo, Nigerians need to hear more from @NCDCgov @Chik…
cnnAM

4:13 am ET January 22, 2020 RETWEET
RT @SFHNigeria: Look out for information on our @Adolescents360 & @IntegratEProj programmes in the media this week Managing Director @Omo…
cnnAM

4:11 am ET January 22, 2020 RETWEET
RT @Omokhudu_I: Excited to be at @MobilePunch to reflect with the leadership team on media's critical role in fast tracking #UHC and ensuri…
cnnAM