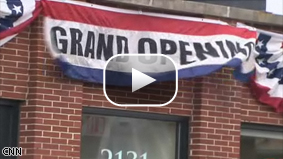 CNN's Jason Carroll reports on how some community banks are booming where big banks are failing.

Bigger is definitely not better right now in the banking business. We're seeing commercial banks buried under a mountain of debt and needing the government to save them from themselves.

But for some smaller, community-based banks... business is booming.

They may not have the name recognition but some start-up banks say they can provide service that's just as good as the larger chains and they say their customer's money is just as safe.

Officials in Fargo, North Dakota are desperately trying to save six thousand homes threatened by the swollen Red River. They need more than a million sandbags to stop the flooding. So far just over 300 thousand have been filled. The river is expected to crest this week at about 40-feet. Flood stage is above 17-feet. Forecasters say more rain is expected over the next several days.

At 12:30 pm Eastern President Obama will make the case for investments in clean energy and new technology which are included in his budget. You can see the President's remarks live on CNN or online at CNN.Com/live.

END_OF_DOCUMENT_TOKEN_TO_BE_REPLACED

A busy Monday morning.  There’s breaking news. Tragedy in big sky country.  Plus – new details on the bank bailout – and a bonus crackdown.