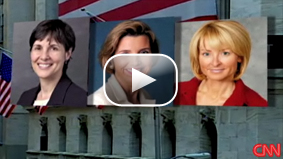 CNN's Alina Cho reports on a group of women who claim they were laid off on Wall Street because of their gender.

“When I got that tap on the shoulder I just was flabbergasted. I was amazed.”

Brittany Sharpton recalled the day last November when she was laid off from her job as an infrastructure analyst at Citigroup. When the 23 year old joined the investment firm in 2007 she envisioned rising up through the ranks and becoming a senior manager. Instead, she was handed a pink slip. Even more amazing to Sharpton was that every woman in her group was let go.

“There was just absolutely no discretion, no regard not only with performance but keeping a generation of women in the group.”

Susan Antilla, who wrote about sexual discrimination on Wall Street in “Tales from the Boom-Boom Room,” is not surprised. She says historically whenever there’s a recession women on Wall Street lose their jobs.

“Inevitably we have downturns, and the downturn comes and whack, they’re gone.”

This time around three of the four most powerful women on Wall Street have been affected, Zoe Cruz at Morgan Stanley, Sallie Krawcheck at Citigroup and Erin Callan at Lehman Brothers – all let go within the past year and a half.

Sharpton believes her job loss, as well as those of the other women in her group is a case of gender discrimination. Charges have been filed with the U.S. Equal Employment Opportunity Commission against Citigroup alleging Sharpton and four others were terminated because they are women.

In a statement to CNN, Citigroup says the job cuts were done, “fairly and lawfully and was based on legitimate business reasons unrelated to gender.”

Sharpton says the incident has not changed her mind about continuing a career in financial service.

“It just further reminded me that I just need to work that much harder.”