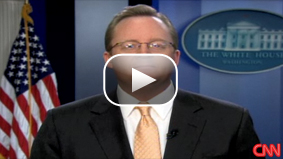 With some lawmakers calling for him to go, Treasury Secretary Timothy Geithner will be back on Capitol Hill this morning asking for even more power to deal with the financial crisis.

Is this something you should be worried about?

It's certain to come up during the President's prime time news conference tonight. 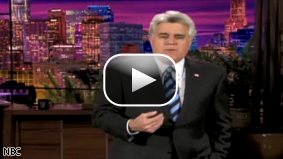 The formula for the successful late night set hasn't changed since the early days of TV, but Jay Leno was a little intrigued with our new layout.

The hottest seat in America may well be the one directly in front of any Congressional committee investigating the failures at AIG and other banks.

The man who has landed in that seat more times recently than anyone else is the President's Treasury Secretary. Seven times Secretary Timothy Geithner has been forced to testify before congressional committees ranging from The Senate Budget Committee to the House Ways and Means panel.

On Tuesday Geithner makes his eighth Congressional appearance. This time it's in front of the House Financial Services Committee.

Congressional committees are supposed to call in witnesses to gather information for legislation or investigate possible incompetence or wrongdoing. But these aren't always the only reasons.

END_OF_DOCUMENT_TOKEN_TO_BE_REPLACED

The stories that will be making news later today.

New ash-fall warnings are in effect today for parts of southern Alaska after the Mount Redoubt volcano erupted for a 6th time yesterday sending a burst of ash nearly 60 thousand feet high. Residents are being told to seal windows and doors and protect water supplies.

At 2 pm Eastern – the battle on the border comes to Washington. A House Appropriations Subcommittee will hear from government agents about America's efforts to keep Mexico's bloody war against drug cartels from slipping into the U.S.

At 9:40 Eastern – this morning President Obama will make a really long distance call to congratulate the shuttle "Discovery" crew and astronauts at the International Space Station on their current mission. The President will make the call with Congressional leaders and middle school students from the Washington area.

A 500-point bounce on Wall Street!  Investors seemed to like the President's re-tooled financial rescue. Do you?

Here are the big stories we’re following for you today:

We want to know what you would ask the president.   Call in with your questions or just a piece of your mind at 1-877-MYAMFIX, or find us on Twitter.