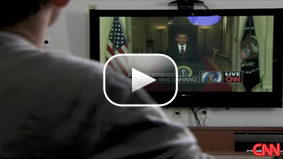 CNN's Jason Carroll gets reaction to President Obama's news conference from the unemployed.

The group was made up of people from different backgrounds and professions.

What they have in common – they're all unemployed.

They also share strong opinions on what they wanted to hear from the President.

Are you unemployed? What are your opinions on the President's news conference? Comment below.

This afternoon – President Obama makes the pitch for his 3.6 trillion dollar budget to Senate Democrats. Its a tough sell – a lot of top Democrats are worried the new budget could add seven to nine trillion dollars in new debt.

The crew of the Space Shuttle Discovery is preparing to depart the International Space Station. Discovery scheduled to undock from the space station at 3:53 ET this afternoon. It will perform the traditional fly-around of the station before heading home. Discovery will return to Earth on Saturday.

Cycling legend Lance Armstrong is expected to undergo surgery at 7 o'clock CT on his broken collarbone. Armstrong said in a Twitter post last night that the injury was more serious than doctors first thought. He says tests showed multiple pieces of broken bone. Armstrong crashed Monday during a race in Spain. The seven-time Tour de France winner plans to get back on the bike by May.

The Best Political Team is up early, breaking down the president’s big sell in prime time.  Some of his biggest supporters and toughest critics will face off, from James Carville to Former Presidential Candidate Fred Thompson.

After a distasteful joke on Leno and some awkward laughter on “60 minutes”, a lot was riding on this appearance.  There were tense moments.  CNN Contributor Bill Bennett said the president walked into a “murderer’s row” in the White House East Room, but the president was able to stay on message, focusing on the budget and the economy.

We want to know if he answered your questions.  Call 877-MYAMFIX with your reaction.  We’re also asking a few recently unemployed workers about their sacrifices, and whether President Obama made them feel better about their future.  The President said the country is moving in the right direction.  Let us know what do you think.