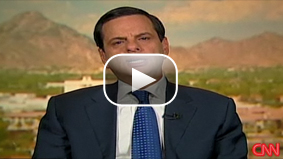 This is a developing story we've been covering for you. Secretary of State Hillary Clinton is in Mexico – as violence threatens to rip that country apart.

65-hundred people were slaughtered last year as rival drug cartels battled each other and the authorities. 800 killed so far this year. Many – beheaded to send a message. And the misery is heading north along with the drugs.

8:19 pm ET January 19, 2021 RETWEET
This is the laugh I needed today twitter.com/microtony/stat…
alivelshi