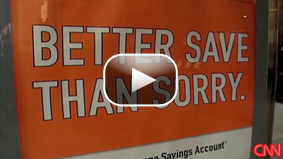 We've all heard about buyer's remorse. It's happened to all of us.

But there is something new emerging in this new tough economy – "saver's remorse."

It does exist... And take note – it can be harmful to your health.

Pretty well if you just look at the polls. His popularity is north of 60%, and that should be enough to drown out all but the most vocal boo birds.

But following the President's press conference Tuesday night an undercurrent of dissatisfaction was evident. The Presidential "Honeymoon Clock" is ticking.

CNN analyst Alex Castallanos, who supports Republicans, says the President's impatience at the news conference over a question about AIG is a sign that Mr. Obama himself is on the defensive about his politics. That question came from CNN's Ed Henry, and had to do with why it took Obama so long to react to the AIG bonuses. "Because," the President said, "I like to know what I'm talking about before I speak."

The next morning, CNN's "American Morning" received mostly favorable calls about the President's press conference, but once again there were doubters. Gloria from Georgia said, "as I watched the Presidential address I want to know when and where can we the people expect some changes." Another said, "He is putting fiction on the plate and not really solving the problems."

END_OF_DOCUMENT_TOKEN_TO_BE_REPLACED

Commentary: No job? Create your own!

[cnn-photo-caption image= http://i2.cdn.turner.com/cnn/2009/images/03/26/art_peter_bregman.jpg caption=" Peter Bregman says the best strategy in the downturn may be to create your own work."]

By Peter Bregman
Special to CNN

Editor's note: Peter Bregman is chief executive of Bregman Partners Inc., a global management consulting firm, and the author of "Point B: A Short Guide to Leading a Big Change". He writes a weekly column, How We Work, for HarvardBusiness.org.

NEW YORK (CNN) - Madame Alexander was one of the great innovators in the doll industry.

According to the company that bears her name, she made the first doll with moving eyelids, the first doll based on a licensed character (Scarlett O'Hara from Gone with the Wind), the first doll fashioned after a living person (Queen Elizabeth) and many others.

But what's most interesting is how and why the company got started.

Beatrice Alexander's father owned the first doll "hospital" in New York City, where broken porcelain dolls were sent to be repaired. That got her thinking. Maybe porcelain wasn't the best material for a doll. So she sat around her kitchen table with her four sisters, and they started a business sewing dolls out of cloth.

More and more Americans are filing for unemployment. Today at 8:30 am eastern the Labor Department releases its report of weekly jobless claims. We'll have those numbers for you as soon as that report comes out.

All day long we'll be watching the severe storms affecting most of the United States. In Fargo North Dakota officials are planning for possible flooding evacuations. While blizzard conditions are expected in the Rockies. Meanwhile the southern states are on watch for extreme thunderstorms.

Later today, IBM is expected to announce it plans to lay off about five-thousand employees. These cuts make up about four-percent of IBM's work force based in the United States. This comes after IBM's January layoffs when the company cut thousands of its workers.

Man vs. Water and the War Next Door… Here are the big stories are on agenda this morning:

The Fight to Save Fargo:  First a blizzard.  Now flooding that could reach near biblical proportions.  They’re piling two-million sandbags in sub-freezing temperatures along the Red River.  People of all ages, professions and backgrounds – trying to hold back the water.
And 200 miles to the west, crews in the capital city of Bismarck are blasting apart ice on the Missouri river.

Stopping a War at the Border: The exclusive interview with Secretary of State Hillary Clinton, who says America’s thirst for drugs is fueling a bloody war in Mexico.  What if Mexico becomes a Pakistan of Afghanistan, but in our backyard?

Some Drama Obama: The president showing a little impatience with reporters and with the pace at which the country’s problems are being solved.  American Morning viewers are getting a little uneasy too.  Is the honeymoon officially over?

Savers’ Remorse: A new state of psychological tension, spawned by this economy.  Why not indulging enough can hurt you emotionally.

And – Pimp This Bum: a father-son marketing team using homeless people to create buzz for their website, but are these entrepreneurs exploiting victims of the times or bringing attention and help to a needy cause?

9:42 am ET January 25, 2021 RETWEET
Food lines. Empty pantries. 15 million on jobless benefits. I understand the need for aid to be “targeted” but thtwitter.com/i/web/status/1…qyagGl
christineromans

9:08 am ET January 25, 2021 RETWEET
RT @JHuberHISC: The Alzheimer’s crisis is on th#DavosAgendada next Monday. Look forward to discussing our global response through the Davos…
alivelshi

6:28 am ET January 25, 2021 RETWEET
RT @Ali_H_Soufan: It is equally important to know what not to do in countering the rising domestic threat as or to know what to do. Always…
alivelshi

7:20 pm ET January 24, 2021 RETWEET
RT @MSNBC: .@AliVelshi: There are some issues that just don’t have two sides. What led to the second impeachment of the former President is…
alivelshi