BALTIMORE, Maryland (CNN) - Dr. Carnell Cooper, a Baltimore surgeon, is saving lives inside and outside the operating room.

Since becoming a trauma surgeon 16 years ago, he has dedicated himself to treating the many young African-American men who've been shot, stabbed or beaten, only to see them return to the ER with another severe injury just months later.

But when one of his patients was readmitted with a fatal gunshot wound to the head in 1996, it changed Cooper's life.

"The night that we pronounced that young man dead and my colleagues said there's really nothing we can do in these situations. ... I just didn't believe that," said Cooper, 54. "From that day forward, I said, 'Let's see what we can do.' "

Cooper created the Violence Intervention Program (VIP) at the Shock Trauma Unit of the University of Maryland Medical Center, the state's busiest hospital for violent injuries. It became one of the country's first hospital-based anti-violence programs.

The strength of a soldier

So much is being said these days about the economy. Who's repsonsible, who's losing what, what should be done to fix it all. But when you meet someone like Chris Levi, a 26 year old Army veteran, everything is quickly put into perspective.

I met Chris at Walter Reed Army Medical Center, where he has been undergoing treatment for the past year.

Last year, his humvee hit a I.E.D. in Iraq. He lost both legs in the resulting blast. His arm was badly damaged. I wasn't sure what to expect when I met Chris. But I know I didn't expect to meet an incredibly upbeat 26 year old. Chris cracked jokes throughout the entire time we spent with him – moments often not caught on camera. Internally I wondered if Chris has really come to terms with his condition. After talking, I knew that he had. It's just that was Chris. We were there to talk to Chris and his family about life after he was released from Walter Reed. Life at home at his parents house in Long Island. The home would have to be retrofitted to make it handicapped accessible. It would cost at least 100-thousond dollars; money his family didn't have. Chris's worry wasn't for himself, it was for his family, telling me, "I thought I might be a burden on the household. I know my mom and dad, no one in the family would see it that way but that's the way I saw it..."

His sister Kim teared up and said, "my greatest fear was that we're going to bring him to this house where there's stairs up and stairs down and we're going to stick him in back room and he's going to playing video games for the rest of his life and this is a kid who is a proud amazing kid, he doesn't deserve that."

A charity organization called Building Homes for Heroes stepped in and raised the money to help Chris and his family retrofit the home so Chris can live more independentally and as he says, live without being a burden to his family.

Chris walked on his two prosthetic legs and we chatted about his recovery. The fact that he was walking at this stage, and walking so well, was a testatment to his strength. I'm not sure how much that strength was captured in our story... I hope it is here. 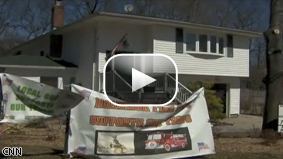 Chris Levi has always been a military man. At the age of 14 he enrolled in military school in upstate New York. Upon graduation, he tried college but the military lifestyle called him back. After watching a news report on T.V. about soldiers dying in Iraq, he went to his local Army recruiting office and signed up. He didn't tell anyone, he just did it.

Chris is now recovering at Walter Reed Medical Center in Washington, D.C. In March of 2008, while in Iraq, Chris was riding in a Humvee when it hit an I.E.D. Chris was blown up along with his vehicle. His life was saved, but his legs were not. He sustained severe injuries to his right arm and almost lost that as well. Chris was transferred to Walter Reed and has been recovering there ever since.

As the reality of his injuries started to take hold, his family, especially his sister Kim, realized that Chris's real battle wouldn't take place in Iraq or in a hospital, but when he came home. "My greatest fear was that we’re going to bring him to this house where there’s stairs up and stairs down and we’re going to stick him in a back room and he’s going to be playing video games for the rest of his life," says Kim. "This is a kid who, he’s just a proud amazing kid, he doesn’t deserve that."

Kim knew that she had to do something. She and her boyfriend started reaching out to the community to try and find a way to help her brother. It was at a 5K Run for charity that Kim's boyfriend came upon Building Homes for Heroes.

END_OF_DOCUMENT_TOKEN_TO_BE_REPLACED

What's Congress up to? 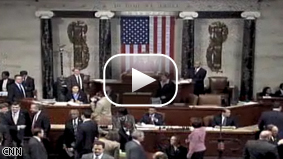 CNN's Carol Costello reports on the smaller bills that are still passing through the House of Representives.

In the midst of the greatest economic crisis since the Great Depression, you'd think it wouldn't be business as usual in the House of Representatives. But you'd be wrong.

The House has taken action on nearly 200 bills and regulations this year. Roughly a dozen of them have to do with the nation’s troubled economy, but many more of them are small bills, which are sometimes referred to as “vanity” bills. They are often inconsequential pieces of legislation naming buildings after friends or colleagues, or honoring a person or group, or authorizing the use of Federal property for use by an outside group.

CNN’s Senior Political Analyst Bill Schneider says these actions by congressmen are useful in “building up their personal favorability rating. That’s how they stay elected... the question is, is it overwhelming other business?”

While it’s doubtful that’s the case, the business as usual presentation of small bills in these troubled times might give the wrong appearance when people are losing their jobs, living in tent cities, or losing their life savings in the stock market. “I think sometimes it seems out of touch,” says Congressional Quarterly’s Jonathan Allen.

So what are some of these bills? The Library of Congress has kept track of every single House of Representative floor action this year.

END_OF_DOCUMENT_TOKEN_TO_BE_REPLACED

At 10 am Eastern, rap star T.I. will head to an Atlanta courthouse to face sentencing for charges he attempted to buy illegal firearms in 2007. The rapper has previously worked out a plea deal that will significantly cut down his jail time.

At 9:25 am, President Obama unveils his new strategy for the war in Afghanistan. The plan calls for up to four thousand more troops on the ground and up to 1.5 billion dollars in humanitarian aid to Pakistan. That's nearly triple the amount the country receives now. The goal: Defeat Al-Qaeda and destroy the safe haven that has developed in Pakistan.

And preparations begin today for the Shuttle Discovery's return trip home. The shuttle is scheduled to make it back to Earth at 1:39 pm tomorrow. The astronauts successfully installed all six solar panel wings.

Here are the big stories we’re working on for you today: