American Morning viewers were transfixed by the protests at the G-20 summit. Comments were mixed, with the majority of viewers in favor of the protests:

Some viewers were pleased to see CNN covering the protests, noting they felt such events were ignored during the Iraqi war:

Others very much opposed the coverage, fearing it would instigate more violence:

What do you think about the G-20 Summit? Are the protestors right to be marching? Was CNN correct in covering the protests or do you believe as the viewer above, that such coverage would incite more violence? Tell us your thoughts.

END_OF_DOCUMENT_TOKEN_TO_BE_REPLACED

Talking to Iran and the "pathology of suspicion" 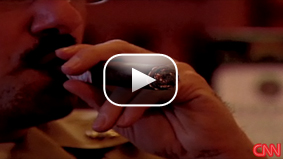 Smokers are fuming over a huge increase in the federal tobacco tax. CNN's Jim Acosta reports.

However they satisfy their nicotine cravings, tobacco users are facing a big hit as the single largest federal tobacco-tax increase ever takes effect Wednesday.

Tobacco companies and public-health advocates, longtime foes in the nicotine battles, are trying to turn the situation to their advantage. The major cigarette makers raised prices a couple of weeks ago, partly to offset any drop in profits once the per-pack tax climbs from 39 cents to $1.01.

Medical groups see a tax increase right in the middle of a recession as a great incentive to help persuade smokers to quit.

What do you think? Is the tobacco tax fair to smokers?

Behind the scenes covering the start of the G-20 summit

Everyone's on Twitter these days, apparently even 10 Downing Street. And our producers were following their tweets as we prepared to go on air an hour early this morning to cover President Obama and Prime Minister Brown's news conference.

So imagine our surprise when one of Downing Street's tweets (ok that rhymes) claimed the press conference was starting at 4:30am ET not 5:15am as we previously thought.

That set off a mad scramble to get ready for air even earlier. And believe me, when a sleep-deprived bunch like our AM crew scrambles, you'd never know we were all getting by on 3-5 hours sleep!

So in the end we went to air a little before 5am to be safe and the news conference went as scheduled at 5:15am.

We had TJ Holmes filling in for John Roberts and Christiane Amanpour and Christine Romans with us on set as well. Behind the scenes, we were all furiously typing and scribbling notes as we listened to President Obama and PM Blair speak and answer questions.

A little later in the show we got a first person account of the protestors and police activity around London with our Becky Anderson. Most were peaceful but we watched a few dust-ups between police and demonstrators live on our air.

And thanks to Twitter we got minute by minute accounts from people in the crowds about what was happening, what streets were closed, how packed the streets were. Fascinating technology.

One of the most interesting parts of covering breaking or developing news is literally watching it unfold right along with the viewers. I always try to ask the questions I would want answered if I were sitting at home watching.

Finding out what you guys want to know is also why we've been getting more interactive on AM with our blog, email, hotline and Twitter accounts.

We want to hear from you, and we'll post some of your comments on the blog as well. 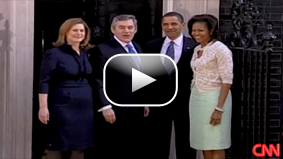 There's no denying Michelle Obama is a rockstar in America. But how is her style and personality playing overseas?

The early reviews are good. The apparent love affair with the U.S. first lady is flourishing in Europe.