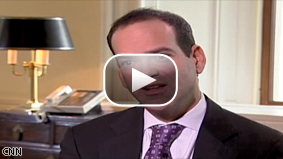 As we're finding out at the G-20 summit, people aren't just mad at the banks in this country but all over the world.

And part of the reason is the bailout.  People are still asking the question: Where has all of that taxpayer money gone?

As it turns out, somebody inside the federal government is trying to get an answer to that question.

Here are some of the stories that will be making news later today:

President Obama will wrap up the first day of the G-20 summit after a morning and afternoon of closed door sessions. President Obama is also sitting down with India's Prime Minister and Saudi Arabia's King Abdullah.

Indictments could be filed against former Illinois Governor Rod Blagojevich as early as today. Today is the last scheduled day the grand jury meets before the April 7th deadline for filing the indictment. Sources close to the investigation say Blagojevich's wife and campaign committee are also possible targets. Blagojevich is accused of trying to sell President Obama's former Senate seat. He denies any wrongdoing.

At 8am ET a tsunami warning will go out along the eastern seaboard after a simulated earthquake in Puerto Rico. It's the first-ever test of a tsunami warning system in the Atlantic and Gulf of Mexico. It's designed to cue coastal communities of the potential danger of huge waves caused by earthquakes

At 8:30am ET we'll hear how many more Americans have signed up for unemployment benefits. That's when the Labor Department releases its weekly report on initial jobless claims.

Centcom Commander General David Petraeus is headed to Capitol Hill today. He'll meet with the House Armed Services Committee. His focus will be new strategies for Afghanistan and Pakistan

At 10am ET the House Oversight and Government Reform Committee will be holding a hearing on the collapse and rescue of insurance giant AIG. Former AIG CEO Maurice "Hank" Greenberg is expected to testify to the committee today.

Here are the big stories and guests lined up for you today: