Somali women flocking to port in hope of marrying pirates 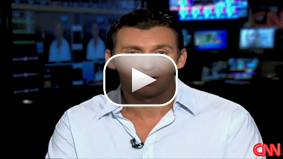 Pirates are holding a U.S. captain hostage at sea. The Navy is watching everything that happens. So what is supposed to happen next? And what is driving this problem? We talked to someone who knows a thing or two about the pirates and has experience covering them in Somalia. Kaj Larsen, former U.S. Navy SEAL, spoke to T.J. Holmes on CNN’s American Morning Thursday.

Larsen says the root conditions of poverty, lawlessness and civil war on the ground in Somalia are to blame. The large sums of ransom money being paid out to pirates, he says, is even leading some Somali women to venture to the port town of Bosaso in hopes of marrying these newly-rich men.

T.J. Holmes: We know that piracy pays. What is it that's going to break this cycle if every time they take a ship, they get paid. Why stop it?

Kaj Larsen: That's the 50 or $100 million question, which is about the money that the pirates took in last year in ransom. The solution unfortunately is not going to be a military-centric one. Ultimately, you to have to find some way to govern this ungoverned space, this lawless sanctuary that the pirates have in Somalia. That's really the only long-term solution you’re going to see to this problem.

Holmes: Let's start with the military solution. Why not send a message?

Larsen: Certainly there would be some deterrent effect. I think in this case, the incentives are so large. The money that they’re making is so extraordinary, especially by Somalia standards, that it would be difficult. However, in this particular situation, the goal is to solve it as quickly and as safely as possible without putting the hostage in jeopardy.

Larsen: You couldn't have said it better, T.J. I’ve been on the ground in Somalia. One of the interesting demographic things that’s happening right now is that single Somali women are flocking to the port town Bosaso where these pirates come out of in the hopes of marrying a pirate. So you can see that it really is - the root conditions of poverty, lawlessness and civil war on the ground in Somalia are really what are breeding this problem.

Holmes: Is it worth the risk for these companies to continue to go through the Gulf of Aden? Does it cost much to take another route? Is it worth it to take the chance, pay the ransom, and keep moving?

Larsen: So far, that's been the model. As these attacks increase, we've seen six in the last week alone, the cost of doing business in that area is just going to be too high. The insurance companies are going to jack up the rates of insurance. And at some point, they're not going to be able to continue without taking much more serious security measures or without finding an alternative route.

Larsen: I think this is a clarion call to the international community that Somalia is and continues to be a failed state. And that if we don't continue to pay attention to it, if we don't start changing the conditions on the ground there, if we don't start governing that ungoverned space that it’s going to be a breeding ground for piracy and possibly international terrorism. So yes, I would hope that this situation, that the silver lining in the cloud is that people would start paying attention to this horrific situation in the country there.

Call our amFIX hotline and sound off: 1-877-MY-AMFIX. We'll play some of your comments tomorrow on American Morning, 6-9am ET.

@JordanOlder_ Perhaps you should actually listen to the entire clip and not retweet out of context conservative propaganda.
alivelshi

10:39 pm ET October 19, 2021 RETWEET
RT @MSNBC: "We've been going two steps forward and one step back on climate for decades now. The latest below from Senator Manchin is the l…
alivelshi

9:13 am ET October 19, 2021 RETWEET
RT @BhadeliaMD: I have news for people who are looking at the unfortunate loss of Colin Powell as a sign that covid-19 vaccines are not wor…
alivelshi

9:13 am ET October 19, 2021 RETWEET
RT @JoyAnnReid: General Colin Powell’s death is so shocking and heartbreaking. He had some tough moments around our wars, but was a fundame…
alivelshi

9:13 am ET October 19, 2021 RETWEET
RT @EarlyStart: "This is good science happening in real time" @DrChrisMD explains why you shouldn't hesitate to get a mix & match Covid bo…
christineromans

5:48 am ET October 19, 2021 RETWEET
RT @MSNBC: "We've been going two steps forward and one step back on climate for decades now. The latest below from Senator Manchin is the l…
alivelshi