Kiran: The debate over the legalization of drugs 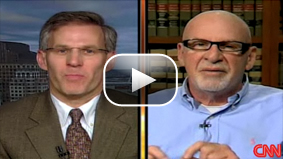 CNN's Kiran Chetry speaks to a former DEA agent and an economist on whether drugs should be legalized.

Good Monday to you,

Hope you had a wonderful Easter and/or Passover weekend. Looks like our prayers were answered! Captain Richard Phillips rescued by our brave Navy Seals. He is now safe and getting ready to be reunited with his family and loved ones. Read the story

All this week on American Morning we are taking a look at America’s drug addiction and how it's fueling the growing violence at the Mexican border. We're calling it “Drug Nation."

This morning we had a debate over legalizing hard drugs – substances like heroin and cocaine. It's a position advocated by Jeff Miron, an economist from Harvard University. Former DEA agent Bob Stutman had plenty to say about why that would be a huge mistake. Watch the debate

END_OF_DOCUMENT_TOKEN_TO_BE_REPLACED

“Armed security detachments” to protect civilian ships at sea. That’s the recommendation of the admiral in charge of U.S. Naval operations off the coast of Somalia.

Vice Adm. William Gortney, appearing on American Morning today, left little question as to what he thinks shipping companies should do to fend off piracy.

The idea of sailors, or shipboard security personnel carrying weapons is a controversial one. Might it provoke shootouts on the high seas? Would it increase the likelihood that acts of piracy could have deadly consequences?

Adm. Gortney views the issue pragmatically. These companies hire armed security to “protect their property on the beach,” he says, so why not extend that to the oceans?

END_OF_DOCUMENT_TOKEN_TO_BE_REPLACED

By Jeffrey A. Miron
Special to CNN

Editor's note: Jeffrey A. Miron is senior lecturer in economics at Harvard University.

The CNN story that provided the hook for my debate with former DEA official Robert Guttman might appear at first glance to make a convincing case against legalizing drugs like heroin or cocaine; the story recounts the tragic death of a teenager from heroin use. Read the story

In fact, the story illustrates perfectly why legalization makes more sense than prohibition, even for hard drugs.

The incident recounted in the story occurred under current policy: prohibition did not prevent this teenager from using heroin.

As the story emphasized, moreover, heroin prices have fallen dramatically over the past several decades to the point where heroin is available in a relatively pure form at prices most teenagers can afford. This shows that government anti-drug policies have been a dismal failure, since the express purpose of those policies is to raise drug prices and reduce use. Federal and state government have spent hundreds of billions of dollars attempting to enforce prohibition, yet availability and purity are higher than ever while price is at record lows.

Thus prohibition has failed to accomplish its stated goals, and it generates enormous negative side effects.

Counterpoint – Drug legalization: "A great idea whose time has not come!"

END_OF_DOCUMENT_TOKEN_TO_BE_REPLACED

Drug legalization: "A great idea whose time has not come"

[cnn-photo-caption image=http://i2.cdn.turner.com/cnn/2009/images/04/13/stutman.art.jpg caption="Robert Stutman is a former Special Agent with the DEA."]

Editor's note: Robert M. Stutman is a former Special Agent with the U.S. Drug Enforcement Administration and Principal of The Stutman Group.

Gee, things aren't going great in the war on drugs: violence in Mexico; more and more kids using dangerous drugs at an early age; kids overdosing all over the country from drugs like heroin and OxyContin. If you like this and want a lot more, let's give any drug to any person at any age who wants to use it and see where that gets us.

Our present system is not perfect and needs a lot of fixing, but blowing up the system and giving up completely would be like a contractor who has to demolish a building and instead of using dynamite to take down the building, uses a nuclear device to take down the city. Granted the system is not perfect, but fortunately, even most religions don't demand perfection, they demand of you to try your best. Surrendering is not trying our best!

END_OF_DOCUMENT_TOKEN_TO_BE_REPLACED

John Roberts: Can you walk us through what happened yesterday?

Vice Adm. William Gortney: It was an ongoing hostage negotiation attempt to keep the event at as low a level of violence as possible so that we could ensure the safe return of the captain. The activity had got to the point where the lifeboat was out of fuel. One of their pirates had left the life boat, needed medical attention and jumped on to one of our rigid, inflatable boats, so they were down to one.

They're tired. The sea state was picking up. They'd agreed for us to tow them into some little better waters as the ship was bouncing around. It was very tense. The on-scene commander could see that the three remaining pirates were very, very intense. One of them held his AK-47 in the back of the captain. We were always concerned about the imminent danger to the captain.

And because of the tensions and the imminent danger, at one point... they exposed themselves where there was an opportunity, and because of imminent danger to the captain, the on-scene commander saw that one of the pirates still held that AK-47, was very, very concerned for the captain's life and he ordered the shots to be taken. Three shots were fired and all were fatal. And it was a phenomenal shot, 75 feet away, the small boat was moving up and down a couple two to three feet and it was at night. Just remarkable marksmanship.