Congressman came under fire in Somalia 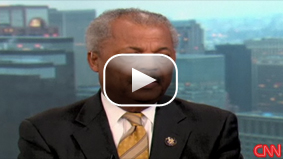 Rep. Donald Payne speaks to CNN's Kiran Chetry about coming under fire on his trip to Somalia.

There are new developments today in the waters off of the coast of Somalia. Another U.S. ship, the Liberty Sun, was attacked by pirates. This time, the pirates were unsuccessful.

Rep. Donald Payne (D-NJ) is the first American member of the government to visit the country in a decade. His plane came under attack as he left Mogadishu earlier this week. Congressman Payne joined Kiran Chetry on CNN’s American Morning on Wednesday.

Kiran Chetry: You witnessed firsthand what a dangerous place and region this is. Why did you go?

Rep. Donald Payne: I've been dealing with that area for the last 20 years. And I had worked during the past two or three years trying to help them form a new government. They had a government I met with three or four times in Nairobi. They were meeting outside of Somalia, called a transitional federal government. They were not strong enough to maintain themselves. There was another group called the I.C.U., the Islamic Courts Union now called the Alliance that then took over a bit. It’s a complicated story but the U.S. suggested that Ethiopia intrude to bring peace, although Ethiopia is hostile to Somalia so that was really the wrong peacekeepers.

Chetry: You said this trip was largely successful. What about being fired on? What happened?

Payne: Well I think there’s certainly a group, the al Shabab, who may be the closest link to al Qaeda. They do not want to see this government work. That's what it's all about. I think the fact that I went there, that there were no problems during the day. We went around to the various places, met with women's groups, the prime minister, the cabinet people. I believe this was desperation. They don't want to see this new two-month government succeed. I assured President Sheikh Sharif that we would want to engage. They have a plan that they feel they can deal with piracy on the ground, on the land, rather than in the sea, which makes it very difficult. So they will be coming up with a plan in a couple of weeks and will submit it to our government and myself.

Chetry: The good news is that you guys didn't even know you were fired upon until you were safely in Kenya. The engine noise drowned that out. Thank goodness you guys are safe. Did the leaders you talked to have a handle on how dangerous this is and did they understand the urgency with which the international community wants them to do something?

Payne: No question about it. They think its going to prevent Somalia from moving forward. They know it's a dark mark on their country. They want to see it end. But, you see, the pirates have money with the cartels and the groups that support them. Al Shabab gets money from extremists who are anti-U.S. The government are the ones with no funds. So they said it's very difficult even though they're going to go forward anyway. But they're the ones that need the support.

Chetry: Would they support Admiral Mike Mullen, Chairman of the Joint Chiefs, who said he hasn't ruled out perhaps attacking within Somalia. Would the government support that, an outside country like the United States launching attacks to cut down piracy?

Payne: I think if we supported the new government, had them form their own police, they have no police, they have no military. They know what to do. They know the terrain. I think it would make a lot more sense to give them the resources to see if they can do it themselves. If that fails, then we can bring in troops. I think it would, at this time, be a mistake to send in troops to try to weed out these terrorists.

8:30 pm ET August 9, 2022 RETWEET
What's in it for you? Five cash benefits in the Democrats' climate and health bill nbcnews.com/politics/congr…
alivelshi

7:58 pm ET August 9, 2022 RETWEET
RT @LeahNTorres: ICYMI, below are the segments (5-7 min each) from our time with @AliVelshi. If I may sidebar: I was very impressed by ho…
alivelshi