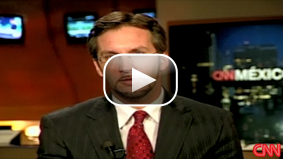 President Obama is headed to Mexico today and will be meeting with Mexico’s president, Felipe Calderon. The president will share his vision about what it will take to tackle the drug cartels to combat deadly violence that’s spilling over the border.

Kiran Chetry: As President Obama gets ready to meet with Mexican President Calderon, what guarantees do we need to give to Mexico first of all?

John Ackerman: I think President Obama should be very aware of the situation that’s occurring here in Mexico, in terms of the serious politicizing that is happening with regards to the combating of the drug traffickers. Calderon has been very much emphasizing the military aspects of the combating of the drug traffickers, which I think is a mistake. We really need to think about institution building and changing the focus of the strategy of the attack on the drug traffickers. Obama should be aware of this. It's very easy to talk about the war on drugs. But it’s also very dangerous because there have been serious attacks on human rights and there hasn’t been enough done in terms of combating corruption in Mexico.

Chetry: You say corruption is a big problem because if they arrest these people the chances that the drug dealers will stay in jail are slim to none. They don't have enough resources to protect them through the courts or the institutions to make that happen. We've promised $1.4 billion in assistance to Mexico to help with all of this. Where is that money going? Isn't that enough?

Ackerman: This is the Merida plan proposed by the Bush administration and approved by Congress last year. It’s $1.4 billion. Just about all of it, 80 – 90% of it goes to high-tech, helicopters, listening devices, military and law enforcement technology. The problem is it doesn't quite do the job if we catch these drug traffickers and they end up on the streets a few weeks later and the criminal justice system doesn't actually work in Mexico, that doesn't actually solve the problem. We need to have a fuller, complete vision of what the problem is and look for long-term solutions. I think that's what Obama can really contribute to this. Rethinking the Merida plan, rethinking the way in which the United States and Mexico work together in planning long-term solutions to this serious problem we have in Mexico.

Chetry: Are you talking more ideas or more aid? We're here in our country dealing with a lot of domestic challenges. We have a recession and record unemployment. In terms of aid, how much more should we be expected to give? Or are you saying more in terms of guidance?

Ackerman: I think it's both. We need to work together, Mexico and the United States on developing the solutions. The important thing is that Obama be aware of what's happening here in Mexico. Calderon has been using this idea of a war on drugs as a kind of political ploy in many ways. He has serious political legitimacy problems. If Obama just comes in and pats him on the back and says “you’re doing a good job as my Elliot Ness,” as he made this comparison in a recent interview – that would be unfortunate. I think we need to see an Obama who has an open view of all the different proposals that exist in Mexican society and all the different parts of Mexican government, which are making different kinds of proposals. And yes, the money can be thought about, but we really need to think about a new strategic partnership, which breaks with this idea that the only way we can relate between the United States and Mexico is by giving military support.