When I read yesterday that the "Slumdog Millionaire” team had donated money to impoverished kids in India, I was thrilled. I had been a part of it.

Trendy white leather sectionals, crystal chandeliers dangling from the high ceilings, beautiful lit candles and best of all the energy that exuded from the cast and crew of “Slumdog Millionaire.” Those are just some of my memories from the amazing Jan. 21 Plan charity event I attended in New Delhi. It was at an exquisite restaurant with a sprawling lounge area and a trendy top shelf bar. Ironically, the event took place two days before "Slumdog Millionaire" premiered in Mumbai.

I had been looking forward to the bash as soon as I heard about it. The thought of seeing Director Danny Boyle and Frieda Pinto in person was exciting especially because “Slumdog Millionaire” was the new craze in our American Morning newsroom. Even at 4 a.m., Executive Producer Janelle Rodriguez and co-anchor John Roberts didn’t hesitate to declare their love for the movie. “Oscar!”: Rodriguez called it.

It was a strange feeling being in India knowing I had already seen the romantic flick in NY and yet it was just being released where it was shot, in Hindustan. I was a little surprised that even some of my family members who lived in India, only heard about Danny Boyle’s award-winning sensation after receiving invitations from Plan. They didn’t really seem to realize the significance of the affair. They definitely were not as stoked as I was.

END_OF_DOCUMENT_TOKEN_TO_BE_REPLACED

Dr. Gupta behind the scenes

CNN Chief Medical Correspondent gives a glimpse of his day behind the scenes at CNN.

[cnn-photo-caption image= http://i2.cdn.turner.com/cnn/2009/images/04/17/ed.keohane.art.jpg caption=" Ed Keohane talks to reporters and makes sure everything goes smoothly during the show."]

Each Friday in “Meet AM,” we’ll introduce you to the people who get American Morning to air.

Today, we’d like you to meet Ed Keohane. Ed produces the first hour of American Morning – he decides what happens on air for that hour, and sits in the control room during the show to guide the plan along. He’s been with AM since October 2006.

How did you end up here?
Back in 2005 I was producing a morning show in Boston. Our sister station in New Orleans got knocked off the air during Hurricane Katrina forcing the staff to relocate to Orlando. A skeleton crew of anchors and producers worked round-the-clock from there, broadcasting live shows that got beamed back into NOLA. Within a few days the team in Florida called for some Beantown backup. I caught a flight, headed south and ended up working alongside a guy who later became CNN's New Orleans bureau chief. We stayed in touch after the storm clouds cleared and a few months later he told me about a job with AM. The stars lined up and I got the chance to come do TV in Manhattan – the news capital of the world!

END_OF_DOCUMENT_TOKEN_TO_BE_REPLACED

America's in love with Susan Boyle... and so am I! 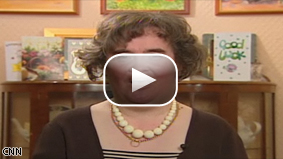 We had the pleasure this morning of talking live to Susan Boyle, the overnight sensation who melted hearts when she sang “I dreamed a dream…” on Britain’s Got Talent. Read story

She spoke with us this morning from her home in Blackburn, Scotland. (There were unfortunately a few audio problems) but she was just as sweet and humble as she was before becoming the most talked about woman in the world of late. She says she is “gobsmacked” (translation = massively surprised) by all of the fame and accolades but she will take it all of it one day at a time—and stay true to herself. I asked her if she thought she’d let the U.K show would give her a makeover like they so often do with reality contestants. Interestingly she didn’t say yes or no!

And since we just cant get enough of her singing…we had her SING a few bars LIVE on our show. Watch

And I have to tell you, I’m just as taken with her as the rest of the world seems to be. And I started thinking about why? Well, first she reminds me of my mother’s Aunt Mary. A sweet, unassuming gentle woman who was just happy and thankful for her modest life. You never hear Mary complain of anything even though she spent a lot of hours alone at home as a widow. She found joy and wonder in all of the small things in life and I never heard her say a negative thing about anyone. That’s what we’ve seen from Susan so far.

When she first walked out on that stage, it was obvious the audience didn’t think much of her due to her modest appearance. It was almost like everyone was in on the joke but her. She didn’t let it stop her. She didn’t get mad or upset. She just opened her mouth and sang. And without having to really say a word, she made a lasting impression on so many of us.

We could all learn a thing or two from that.

No jail, just rehab for some drug offenders