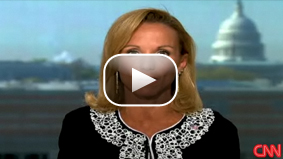 A Bush-era memo released by the White House Thursday revealed interrogation methods used by the Bush administration including waterboarding, sleep deprivation and forced nudity. Some of the methods Bush lawyers approved included keeping detainees naked, in diapers or in cramped confinement. Some former Bush officials say President Obama’s decision to declassify these memos is putting the country in danger.

John Roberts: What is your take on the release of these memos? These were among the Bush administration's most closely-guarded secrets.

Fran Townsend: John, we should be clear with our viewers. Even during my time in the administration, I wasn't a part of the policy discussions but I will tell you here is my concern about the release of them. Regardless of what you think on the issue of whether or not waterboarding is torture, there were legal documents created and relied upon by career intelligence officials who then implemented the program. There were very strict controls on the program. These people relied on them and, now, to release them and to subject these people, these career professionals to a sort of public humiliation and opprobrium and then the potential of a congressional investigation really will make our intelligence community risk-averse.

I think that is what Mike Hayden, the former director of CIA, is getting at when he says “look you’re going to make us less safe.” I think there’s real potential in that. I think the administration needs to come out and tell us why did you release them? I think they made the right decision to say they are not going to prosecute intelligence officials and I think Dennis Blair, Director of National Intelligence, made a very strong statement on that issue. But I will tell you, then why did you release them? What was the purpose? Because we've won legal cases in the courts to protect those memos up to now from public disclosure.

Roberts: Attorney General Eric Holder said in a statement, “The president has halted the use of the interrogation techniques described in these opinions, and this administration has made clear from day one that it will not condone torture. We are disclosing these memos consistent with our commitment to the rule of law.” So this administration has promised greater transparency to the American people. These methods are no longer in use. Why not disclose them?

Townsend: I think it’s perfectly legitimate for this attorney general and this president to decide they’re not going to use this technique. But by disclosing them you've really handcuffed future administrations. And by the way, the president has appointed a group to look at the effectiveness and use of these techniques. And that group has not come out with their findings yet and it really does foreclose their ability to say they are effective. In this morning's "Wall Street Journal" there’s an op-ed by Director Hayden and former Attorney General Mukasey, that gives the example of how the use of techniques led to the ultimate capture of Khalid Sheikh Mohammed. And so there is an argument to be made that in limited circumstances these techniques can be effective in preventing terrorist attacks.

Roberts: According to this memo, the techniques included walling, which is pushing a person against a wall. It was intended to shock, more than anything. A facial slap, which was an insult slap, according to the memo. Cramped confinement, wall standing, stress positions, sleep deprivation, insects placed in a confinement box and waterboarding. You said you weren't a part of the policy development but were you aware of these techniques and were you concerned they might have crossed the legal line?

Townsend: To tell you John, I was not a part of either the legal discussion or the policy discussion. And the enumerated list of techniques that you've gone through was probably one of the most closely guarded secrets even within the administration. I was aware that there was a program and it was later on that I understood not simply what the techniques were but that there were medical personnel involved, that the techniques could only be approved by the Director of CIA.

8:23 pm ET September 17, 2021 RETWEET
Mehdi Hassan has been critical watching and reading for years. If you aren’t already following, watching, or readintwitter.com/i/web/status/1…a8Pi
alivelshi