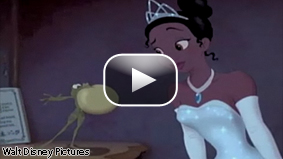 “This is the perfect one-two punch with Michelle Obama being the first African American first lady in the White House. She has really turned into this style icon. Now we have Princess Tiana. It's just a great time to be an African American woman because we are being showcased everywhere in great light,” says Murray.

While Tiana’s story shares some similarities with previous princesses she is a more modern princess. She has her own career; far different from cartoons of years past. Racial stereotypes used to be everywhere, even in some Disney productions.

“It used to be that we would see people in black face, we would see minstrel shows we would see black people portrayed in subservient positions. And it is so wonderful that we have finally moved past these stereotypes.”

In recent years Disney has made of point of creating princesses who are more diverse. First there was Jasmine, Pocahontas, then Mulan, and now, Tiana.

Disney's marketing machine is in high gear. The doll was unveiled last month at the American International Toy Fair. The movie will be out by the end of the year.

It’s called "The Princess and the Frog." Set in New Orleans, Tiana is a waitress and a budding chef. She kisses a frog who, no surprise, turns out to be a prince.