Perez Hilton’s rant against Miss California captured the spotlight on American Morning. Most felt Miss California was justified for standing up for her beliefs. Others felt the presentation of Mr. Hilton was biased.

Who do you believe was correct in this argument, Miss California for standing up for her beliefs, or Mr. Hilton, for demanding his rights as a citizen of the United States? Tell us your side of the story.

END_OF_DOCUMENT_TOKEN_TO_BE_REPLACED

Credit crunch – Washington to the rescue, yet again? 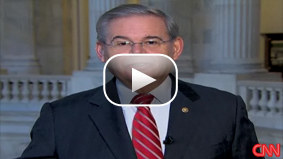 Have you noticed your finance charges climbing higher on your credit card statement? Or maybe you've been late paying your electric bill and next thing you know your credit card percentage rate jumps?

Well, Washington is apparently sitting up and paying attention to the pain of many consumers already drowning in credit card debt who are finding new fees and surcharges making it worse.

President Obama meets Thursday with credit card company executives to try to push for changes to predatory practices. There are also bills in the House and Senate to do the same.

New Jersey Senator Robert Menendez joined us this morning because he is spearheading one effort. Watch the interview

Sen. Menendez is calling for a stop to "blanket rate increases," an end to "universal default." This means if you are late on one card it can bump up your rate on another, which then requires penalties and other fees be tied to their actual cost. It is getting ugly! But there are two sides to every story. Lenders say they've been hurt by the rise in defaults and delinquencies and that legislating the way they do business will restrict the flow of credit and slow the economic recovery.So all eyes will be on the White House to see if and how this gets resolved.

We are going to continue to follow this debate and see where things go tomorrow on American Morning. We'd like to hear from you. Call our show hotline at 1-877-MYAMFIX. And follow us on Twitter @amFIX and @kiranchetrycnn. 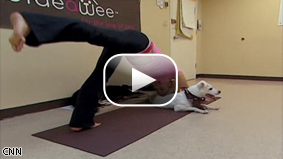 Having inherited my mother's abject fear of animals, I try to stay clear of anything with four legs and fur.

Yoga is too slow for me. All that breathing and stretching and chanting and centeredness. Boring. I'd rather jump and kick and pump and gasp for air.

But my curiosity got the best of me when I discovered that Bideawee, an animal welfare organization in Manhattan, offers a yoga class for dogs - doga. During the 45-minute session, pooches and their masters give new meaning to the phrase "downward facing dog."

The story of Anvil

It’s been a bad couple of months for Craigslist. In March, New York radio reporter George Weber was killed by a man he allegedly met on Craigslist. And now, Boston police are attempting to connect the dots between alleged killer Phillip Markoff and what they believe may be ‘multiple’ victims he found on Craigslist.

The website’s CEO, Jim Buckmaster, seems genuinely concerned. “We feel terribly and feel sad that anyone would lose their life”, he told me in an exclusive interview, saying he was “horrified that use of Craigslist would be connected with a violent crime of this nature.” Watch the interview

He also defended the website from the notion that it was a conduit for criminal activity, saying “there are 50 million Americans using Craigslist each month. When you have that kind of human activity, there’s going to be things going wrong despite everyone’s best efforts to protect people.”

Buckmaster is eager to counter any negative perceptions about Craigslist. It is a valuable commodity – one of the internet’s more successful ventures – and therefore a ripe target for critics.

If alleged killer Phillip Madoff had stalked his victims through the “personal ads” section of the Boston Globe, would there be so much publicity?