Small airport funding received mixed reviews, with pilots and those in rural areas supporting the measure while others “would like to see Mr. Porky Pig justify that to a mother of three that has real struggles!”

Should small airports receive a stimulus, as the first viewer believes, or do you feel more as viewer two states, that “Mr. Porky Pig [needs to] justify that [funding] to a mother of three that has real struggles”?

END_OF_DOCUMENT_TOKEN_TO_BE_REPLACED

There is a new push from Congress to try to overhaul America's prisons.

Senator Jim Webb (D-VA) calls our system a national disgrace. He says while we have just 5% of the world's population, we have 25% of the world's known prisoners. Also, drugs, corruption and violence are rampant inside of our jails and prisons.

Senator Webb is co-sponsoring a new bill to try to tackle these problems. Before launching this bill, his office collected facts about America's prison system.

According to his research, America has 2.3 million people behind bars. That’s five times higher than the world's average incarceration rate. Another 5 million people are either on probation or out on parole. That makes them a part of the criminal justice system. And the number of jailed drug offenders here in the U.S. has increased 1200% since 1980. That research also says four times as many mentally-ill people are in prison than in mental health facilities.

Kiran Chetry: You are pushing for legislation to fix our nation’s prisons. What are the biggest problems as you see them?

Jim Webb: Well, I've been involved in this issue for many years as an attorney and as a journalist. In fact, at one point, I spent a month going through the Japanese criminal justice system. When I came to the Senate in 2007, I decided to hold hearings on mass incarceration and on drugs policy and to try to figure out where the criminal justice system itself is broken. We've got 2.38 million people in prison. We’ve got 7 million inside that criminal justice system. And yet our neighborhoods aren't any safer, particularly with the violent gangs, transnational gangs, etc.

END_OF_DOCUMENT_TOKEN_TO_BE_REPLACED

What do you think? Is this wasteful spending of taxpayer dollars? Or is Rep. Murtha just doing his job? 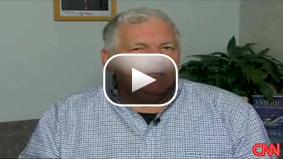 President Obama hasn't shied away from controversy during his first hundred days, but a keen ability to rebound from criticism has some critics wondering why the outrage doesn't stick. CNN Political Contributor Bill Bennett is the author of "The American Patriot’s Almanac." He spoke with John Roberts on CNN’s “American Morning” Thursday.

John Roberts: The president attracted a fair amount of controversy at the Summit of the Americas in Trinidad and Tobago last week when he shook hands and was all smiles with Venezuelan President Hugo Chavez. It prompted Jonathan Martin in Politico to write, “Several times a month in his young presidency, Barack Obama has done things that cause conservatives to bray, using the phrase once invoked by Bob Dole, ‘Where’s the outrage?!’” The president seems pretty Teflon in his first hundred days. A lot of stuff just kind of bounces off of him.

Bill Bennett: Yeah. The American people are giving him a lot of breaks. It is the first hundred days. They like him. They voted for him. They elected him. They want him to succeed. All of that is understandable. The second hundred days is going to be different. These are no longer matters of photo-ops with Hugo Chavez. What he has unleashed with the CIA interrogation memo is the furies. This is going to be a major issue and I think an embarrassment and problem for him. Maybe more important, you know, CNN has been great on this, covering the situation in Pakistan. This is the real world. This isn't the warm-up now. This isn’t rehearsal. This is the real game now. If the Taliban moves in on the capital of Pakistan, we are talking about serious international crisis, and then we'll find out about our Commander in Chief.

END_OF_DOCUMENT_TOKEN_TO_BE_REPLACED

How can I avoid injury during my dancing workouts?

“Dr. Gupta, I saw you on “Dancing with the Stars” this week and it was great! I started dancing about three months ago and have lost about 10 pounds. I am having fun on the program but do worry about getting injured! What can I do to lower my risk?”

Hi Suzy, thanks for writing in. It’s great to hear you started dancing as a way to get fit. It’s a great way to burn calories without it feeling like a chore. The key for anyone looking to get in shape is to find a fitness routine you enjoy! You’ll stick with it longer and may even inspire a friend or two to join you.

Many dancers say they feel longer and leaner from just a few months of classes. Exercises like dancing, or even Pilates for example, impact the density of your muscle versus the size of the muscle. The muscle fibers are engaged differently from the way they would be in a person lifting weights. It is a great body-shaping activity, keeping the core engaged the entire time and toning and strengthening your muscles. 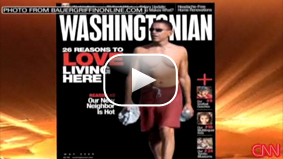 A magazine is taking heat for doctoring a photo of President Obama with his shirt off.

When it comes to news photos, what’s real? And what isn’t?

That’s the question being asked once again today as the latest issue of the Washingtonian magazine hits the stands.

The cover photo shows a shirtless, buffed Barack Obama walking in red swim trunks against a black background. While it IS Barack Obama in the photo, much of the rest of it has been altered or “Photoshopped” to make the photo very different from the original one.

That original photo can be seen on the web here. It shows Obama vacationing last December as he comes out of a building wearing black trunks. But if you look at the Washingtonian cover, you’ll notice that, presto, the trunks are now red and the background has disappeared. It also appears as though his chest is glowing or shining in the Washingtonian version.