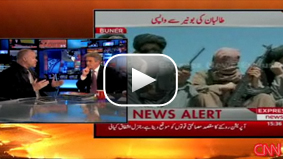 Roberts: Yesterday on Capitol Hill, Secretary of State Hillary Clinton accused Pakistan of abdicating responsibility of taking care of the Taliban and other extremist elements. She also pointed some fingers at the United States.

“We're wondering why they don't just get out there and deal with these people. But the problems we face now, to some extent, we have to take responsibility for having contributed to,” Clinton said.

Bernsten: In her statement she also stated the United States created the Taliban or participated in the creation of the Taliban, which is a ridiculous statement. We created and worked with the Mujahideen a decade before that, and they were defeated by the Taliban, which were created by ISI, the Inter-Services Intelligence Directorate of the Pakistani military. And of course, the reason the Taliban were created was because there was a civil war going on among factions of the Mujahideen who had come to power.

Roberts: I think the broader point she was making was that the U.S. disengaged from the region.

Bernsten: The U.S. unfortunately did disengage and we're paying a price for that. One needs to be careful when talking about the forces that are arrayed on the ground there. There are former Mujahideen commanders that are working with the Taliban right now, not because they believe in the seventh-century style of Islam that the Taliban believe in, but because they're ambitious men that want to come back to power. That’s the only reason.

Bernsten: I don't think you’re going to have a situation where they fall in the hands of the militants. That would only happen if the government completely collapsed and if the military collapsed. I don’t think you’re going to see a military collapse in Pakistan. I think what you're going to see is the likelihood that the civilian government won't survive over the long haul. The military may reassert itself, come back to power and have a violent suppression of the Taliban.

Roberts: You say Pakistan doesn't have the manpower to effectively fight the Taliban because they’re arrayed throughout Kashmir along the Line of Control in the decades-long standoff with India. They're in other areas along the border between Pakistan and India. If India wants to get rid of this problem too, does it bear some responsibility?

Bernsten: The Indians are going to need to assist the Pakistanis by reducing tensions. And the Indians should pull some of their forces off the Line of Control and the border, which is south of that, so that Pakistan itself can reduce its numbers and use those forces inside Pakistan to suppress the Taliban.

Roberts: So you’re saying this is everybody's problem?