Is Obama the first 'hip' president? 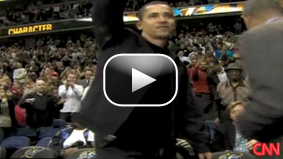 Author John Leland speaks to CNN's Alina Cho about President Obama being hip as a politician.

He sits courtside in all black, posts video on YouTube, goes on Leno, and he fought for the right to carry his Blackberry. But does that all make President Obama hip? And does it help the president politically?

John Leland is a reporter for the New York Times and wrote the book "Hip: The History." He joined Alina Cho on CNN’s “American Morning” Monday.

Alina Cho: You call President Obama the first hip president. You wrote, “He’s white and he’s black. He’s an elitist and he’s regular folk. He’s not pinned down to a perspective.” Why is being hip important? Why is it noteworthy?

John Leland: He is the first president certainly to make this question relevant. Is this guy hip or not? He looks good courtside as you say, looks good in all black. In my book, I talk about where this idea of hip comes from and it seems to come from these western African words hipi or hepi “to see” or “to open your eyes.”

Cho: How is he different from all the others?

Leland: Because he has his eyes open in ways the others do not. He has an awareness of different parts of American culture that we haven't seen from a president before.

Cho: It's one thing to be hip and another thing to be effective and powerful. How does this translate into good public policy or effectiveness?

Leland: Hipness should never drive our public policy. Hip won't get us out of our bank problems and it won't raise your kids. There are a lot of things hipness cannot do. But it can rally some public support.

Cho: In terms of public perception, it could change things for him, right? And that could rally support for public policy down the line? Could it not?

Leland: We get behind the hip guys. We like the nerd a little less.

Cho: I believe your newspaper, a few months back, did a piece about the president being out and about in Washington, he and the first lady going to restaurants, sitting courtside as a Wizards game. Is there a danger in having a president who is too accessible? I mean, he is still the president of the United States.

Leland: Do we get comfortable with him when we see him without his Superman outfit? Perhaps. But I think we're in a more casual time than that now.

What do you think? Is Obama the first "hip" president? Does it matter?