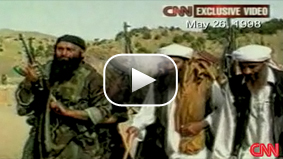 Zardari was elected last September. I met him the night the votes were counted as he celebrated at a beautiful garden party outside a sparkling palace overlooking the capital. He was charming. His aides told me I could ask one question only, that I'd get a longer interview later. That was seven months ago and I'm still waiting.

I learned then the president's team rarely give him camera time one-on-one with reporters. When faced with three of them Tuesday he appears to have inadvertently stumbled in to creating a headline he didn't intend because barely three hours later his own prime minister contradicted him. He said they have no such evidence Osama bin Laden is dead and wasn't aware of the president's comments.

Before Zardari came to office his predecessor's officials regularly briefed reporters bin Laden was dead. Why? To deflect criticism the al Qaeda leader may be hiding in Pakistan. They would tell us they had no information about him therefore he must be dead. They'd often follow that with a line about, well if the CIA knows where he is in Pakistan why don't they tell us.

President Zardari appeared to be treading perilously close to those same confusing statements. The trouble is when a head of state says bin Laden is dead it is hard to ignore. For many observers of Pakistan's often tumultuous politics the bin Laden news spike has the hallmark of a disconnect between the country's two leading men that they say is indicative of the country's faltering politics. Not that these two good friends are falling out just they seem out of step when the country and the world are looking to them for a coherent path forward against the growing menace of an emboldened Taliban.

The read I have is that if bin Laden were dead, which I hasten to add we have no evidence for at this stage, President Zardari is unlikely to be the one to break the news to the world. The al Qaeda leader still has enough supporters in this country that if Pakistan were hinted to have a hand in his demise the backlash would last for weeks.

The only caveat I offer is that Osama bin Laden is a big dark secret and any time, any day we may learn he has met his maker, but expect a few more false starts before that happens.

Reaction to the low flying planes over New York and New Jersey elicited mixed response by viewers. Some were deeply concerned about the event taking place without warning, causing “public alarm.” Others felt “there are a bunch of whiners living in New York” who need to “grow up, quit whining and move on” from the tragedy of 9/11.

Recognizing that Americans are still very sensitive to the tragedy of 9/11, do you believe NY / NJ overreacted to seeing the low flying planes in their skies? How would you have reacted in a similar situation?

END_OF_DOCUMENT_TOKEN_TO_BE_REPLACED

The Specter party switch would give Democrats a filibuster-proof Senate majority of 60 seats if Al Franken holds his current lead in the disputed Minnesota Senate race.

"Since my election in 1980, as part of the Reagan Big Tent, the Republican Party has moved far to the right," Specter said in a statement posted by his office on PoliticsPA.com.

"Last year, more than 200,000 Republicans in Pennsylvania changed their registration to become Democrats. I now find my political philosophy more in line with Democrats than Republicans."

END_OF_DOCUMENT_TOKEN_TO_BE_REPLACED

Editor's note: Frances Fragos Townsend, a CNN contributor on national security issues, served as President George W. Bush's chief anti-terrorism and homeland security adviser. Townsend has spent more than two decades in the fields of intelligence and criminal justice and has served during the past three administrations. Townsend is currently a consultant to the U.S. Chamber of Commerce and a member of the Council on Foreign Relations and the Aspen Institute Homeland Security Program.
[cnn-photo-caption image= http://i2.cdn.turner.com/cnn/2009/images/04/28/townsend.art.jpg caption= "Former Homeland Security Adviser Frances Townsend calls the NYC plane scare 'felony stupidity.'"]
Yesterday, a Boeing 747 that functions as Air Force One and two F16 fighter jets buzzed the skyscrapers of lower Manhattan on what was described as a combination photo shoot and training mission. The over flight created panic and confusion among New Yorkers for whom the memory of September 11, 2001 remains seared in their minds. Like many New Yorkers, I lost a friend in the attack on the World Trade Center and was outraged by the insensitivity on display yesterday. Louis Caldera, director of the White House Military Office acknowledged responsibility for the gross lack of judgment in his decision and he apologized. That is not good enough.

President Obama and White House Chief of Staff Rahm Emanuel were described to me as rightly shocked and furious when they learned about the over flight. It is my understanding that they are looking into how this outrageous error could have been made. While the White House has said that it shares blame with two midlevel New York officials who were notified in advance, this is a weak and specious defense. After all, if Mr. Caldera had not approved the over flight there would have been no need for a notification. Furthermore, if the White House Military Office needed a training mission and a photo of Air Force One over a national icon there were more appropriate choices...say the Grand Canyon or Mt. Rushmore!

END_OF_DOCUMENT_TOKEN_TO_BE_REPLACED

The swine flu has hit one family right where they live. The Henshaw family has been in voluntary isolation since their son, their daughter and also the father were diagnosed with the swine flu virus. So how is the family coping? The Henshaws spoke to Kiran Chetry on CNN’s “American Morning” Tuesday from their home in Cibolo, Texas.

Kiran Chetry: Robin, you're still free of the swine flu. You are all wearing masks as a precaution and because our camera people are there filming in your home. Thanks for being with us. Patrick, why don't you start by telling us what happened. How did you guys find out that you, indeed, did have members of your family infected with swine flu and what happened from there?

Patrick Henshaw: Robin took Hayden to the doctor because he had had a fever, his throat was sore and we just assumed he might have strep throat or something. While she was at the doctor, a message came over the phone from our superintendent of education saying two children had tested positive for swine flu and so while they were at the doctor, I called her and asked her if they would see about checking Hayden and that is when he tested positive for that strain.