The top-ranking U.S. military officer said Monday that North Korea's reported nuclear test is a primarily a diplomatic matter right now, not a military one.

"Obviously we've got forces deployed to that part of the world, we have had for a significant period of time, we've got over 25,000 troops who are stationed in South Korea," he added. "We've got very close alliances there with Japan and South Korea as well. ... The countries who are involved in [the six-party talks], I think, are absolutely critical as we move forward to address this increasingly belligerent challenge from North Korea."

Mullen said the test did not come as a surprise to the United States.

"We weren't surprised because of recent statements by North Korean leadership that they intended to do this," he said.

"As you know, they also recently ... unsuccessfully launched potentially an intercontinental ballistic missile."

Men have a biological clock?

[cnn-photo-caption image=http://i2.cdn.turner.com/cnn/2009/images/05/25/carroll.bio.clock.art.jpg caption="CNN's Jason Carroll reports on a recent study that suggests men have their own biological clock."]

It has been happening for centuries – an older man taking a younger bride. Popular with kings in earlier times, in this day it is not uncommon with Hollywood royalty.

A 20-something-year-old I met tried to sum up the thinking on the male biological clock, saying “We don't have to deal with the whole, you know, estrogen issues. So men keep on pumping it out but women – they can't.”

The truth is there may be a male biological clock – and it’s ticking.

The headline from a recent study: Older fathers may mean lower IQs in their children.

Researchers found children born to 50-year-old fathers scored slightly lower on intelligence tests than children of a 20-year-old father, regardless of the mother's age. The researchers analyzed data from more than 33-thousand American children. The study's outcome is a hot topic in the blogosphere.

“I would hope that somehow it equalizes relationships of sexes,” says Lisa Belkin of the New York Times.

Belkin blogged about the study and wrote an essay titled "Your Old Man," for the New York Times. The response, she says, has been overwhelming.

“The men are getting really angry and the women are a little too gleeful… There were just hundreds and hundreds of people and you could just divide them into two categories based on gender,” says Belkin.

Now there is a new sense of urgency with some men.

Dr. Harry Fisch is a professor of urology. He reviewed the study and cautioned more testing needs to be done because the study did not follow children's intellectual development beyond age seven.

END_OF_DOCUMENT_TOKEN_TO_BE_REPLACED

North Korea delivered on its threat Monday, conducting a second nuclear test that angered governments around the globe. The North had threatened to do so unless the U.N. Security Council apologized for imposing sanctions on it following a rocket test on April 5.The secretive communist state also apparently test-fired a short-range missile on Monday, the White House said.

Jim Walsh, an international security analyst at the Massachusetts Institute of Technology, says more sanctions against North Korea will not work. He spoke to Kiran Chetry on CNN’s “American Morning” Monday.

Kiran Chetry: What does this claim from North Korea about the nuclear test and short-range missiles mean?

Jim Walsh: If you're just waking up on Memorial Day and you look at the headline, you say, my gosh, North Korea has had a nuclear test does this mean war, does this mean military conflict? The answer is no… We've had a previous North Korea nuclear test. It did not result in military conflict. And I don't think that's what’s going to happen this time either. What we're really talking about are not military consequences but political consequences. Both inside North Korea, which is undergoing some sort of transition, and regionally with Japan, with China, with South Korea. So it is an unwelcome event, I have to underline that, but there's no reason for panic or fear.

Walsh: Well, if I could answer the question, what precisely does North Korea want, I would be a wealthy man and I’d be on an island somewhere, not in the studio right now. Because at the end of the day, we don’t know that much about North Korea. Anyone who says they're 100% sure, you know, I wouldn't trust what they say. But we can have some guesses. One theory, a popular theory for some time, is North Korea does this sort of thing in order to improve its bargaining position. By taking a provocative action, suddenly people scamper and want to do something to ratchet back the tension and it also has the effect of dividing the countries in the six-party talks. Japan tends to get quite upset about these things; China, less so.

That divides the parties, improves the country's leverage. That's the traditional theory. There are some, and I'm starting to move to from the traditional theory to this alternative notion, which is this is less driven by external events and bargaining and more by internal concerns. Again, Kim Jong-il had a stroke. There's no clear line of succession. They are now in the process of trying to establish some sort of order for a new leader in North Korea at some point and when that sort of thing happens, governments often have shows of strength and that's not unusual for North Korea in particular to do that sort of thing when there's domestic change at home.

END_OF_DOCUMENT_TOKEN_TO_BE_REPLACED 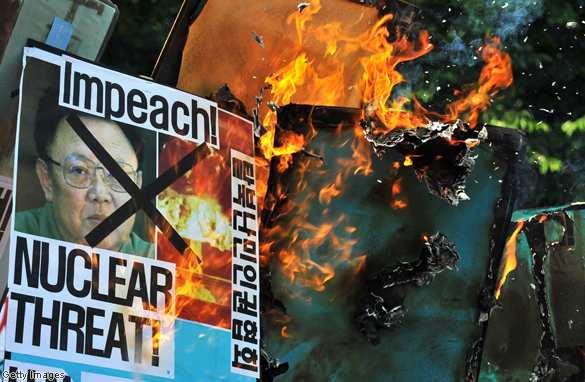 South Korean protesters burn anti-North Korea signs during a protest in Seoul on May 25, 2009 in response to the communist country's claim it conducted a nuclear test.

Here are the big stories on the agenda this Memorial Day: