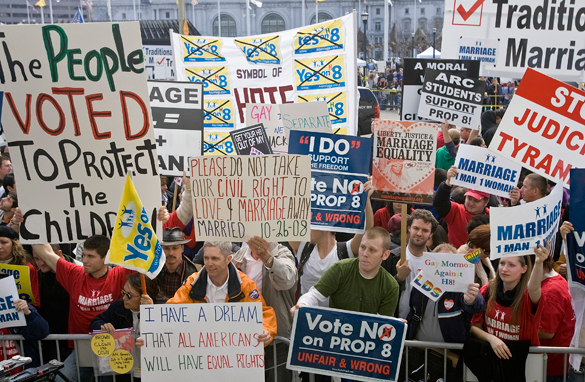 People rally in front of the California Supreme Court Building after arguments were heard for and against Proposition 8 March 5, 2009 in San Francisco, California.

The 6-1 ruling was met with chants of "shame on you" from a crowd of about 1,000 people who gathered outside the court building in San Francisco.

"It's nice that my marriage is still intact, but that's not the point," said Kathleen White, who married her partner in 2008.

Opponents of the ban argued that the controversial Proposition 8, which state voters passed 52 percent to 48 percent in November, improperly altered the California Constitution to restrict a fundamental right guaranteed in the state's charter.

But the court - which had allowed same-sex marriages in a 2008 decision - found the measure was narrow enough to pass legal muster.

Attorneys for the opponents also said the proposition, which removed the "marriage" label from same-sex unions, effectively deprived same-sex couples of a fundamental right guaranteed them under the equal-protection clause in the U.S. Constitution.

END_OF_DOCUMENT_TOKEN_TO_BE_REPLACED

Cyber bully victim and her mom speak to American Morning

When I first read about this story over the weekend, it sure sounded like a case of childhood bullying taken to a new extreme. I had to know more, so I asked our producers to call on the story. They booked Piper Smith and her mom Beth for our show.

I spoke earlier today with Piper Smith and her mom Beth about a video posted on YouTube titled "6 ways to kill Piper" made by some 11 and 12-year-old girls in Piper's class. Like any parent would be, Beth is outraged and claims the school district and the local sheriff and even the girls' parents aren't taking this seriously. Piper told us she is intimidated and so shaken up by the whole thing that she doesn't feel comfortable in her classes anymore. Here's a clip:

You can hear all of what they had to say and how the school district and sheriff's department responded tomorrow on CNN's "American Morning" 6-9am ET.

A harsh reality is facing the class of 2009 as they begin life after graduation. Many employers are cutting the number of college graduates they hire. Recent graduates are now hard-pressed to find work, but some grads are taking their search for work in a whole new direction.

One of those is Michael Volpe. He has brought his job search to the Metro of Washington, D.C. where he wears a sign around his neck that reads: “Entry Level Job Seeker.” He spoke to T.J. Holmes on CNN’s “American Morning” Tuesday from outside the Judiciary Square Metro stop in D.C.

T.J. Holmes: You have a degree in Physics. You're a former Peace Corps volunteer. You're a pretty impressive guy. Explain to us what you have resorted to doing?

Michael Volpe: Well, I was frustrated with the internet job search and just writing cover letter after cover letter and sending off resumes. I’ve attended career fairs; I’ve used networking; pretty much any means I could try to get work here in D.C. And I was tired of it all, so I just came up with the idea and hung a sign around my neck.

Holmes: Why this idea? I’m sure there are other directions you could have tried first. But this is one that really put you out there.

Volpe: Yeah, I chose this way because this way I can see people. They can see me. They can see I'm a clean-cut guy. I’m ambitious, creative, obviously, by the sign. And I just wanted to get that interpersonal relations working for me. And so far it has been.

END_OF_DOCUMENT_TOKEN_TO_BE_REPLACED

'How to kill Piper'

[cnn-photo-caption image=http://i2.cdn.turner.com/cnn/2009/images/05/26/piper.youtube2.art.jpg caption="An eleven-year-old girl is the victim of extreme cyber bullying in a video posted on YouTube.com."]

Who on earth would post a video on YouTube on how to kill a 6th grade girl?

Turns out… it would be her classmates.

The 11 and 12-year-old girls are students at the Elk Plain School of Choice in Spanaway, Washington. The video, which the girls made away from school, details the “Top Six Ways to Kill Piper.” (YouTube has since removed the video.)

Their suggested methods? Everything from using a gun on Piper, to pushing her off a cliff, to forcing her to commit suicide by hanging from a tree.

The girl, Piper Smith, and her mother are angry and going public. Watch "American Morning" Wednesday for an interview with Piper and her mom.

Earlier Piper told CNN affiliate KING5-TV that “It really, really hurts my feelings. I mean, if somebody hated me that much just to make a video about me like that, it would make me feel really bad.” Her mother, Beth Smith, was “horrified. I would hope to find kids making jokes, and it wasn’t. It was death.”

So far the local Piece County, Washington Sheriff’s Department has not pressed charges against the girls.

END_OF_DOCUMENT_TOKEN_TO_BE_REPLACED

Toobin: Sotomayor will be voice for moderate liberalism

[cnn-photo-caption image=http://i2.cdn.turner.com/cnn/2009/images/05/26/sotomayor.getty.art.jpg caption="Sonia Sotomayor speaks as President Barack Obama listens after announcing her as his Supreme Court nominee May 26, 2009."]

President Obama announced today he has chosen federal judge Sonia Sotomayor as his nominee for the U.S. Supreme Court. If confirmed, Obama's nominee will replace retiring Justice David Souter, who announced this month he would step down when the court's current session ends this summer.

T.J. Holmes: Jeffrey, any surprises here to you? It seems like she has been the front-runner since David Souter said he was going to step down.

Jeffrey Toobin: Well, if the president was going to pick a judge, it seemed very likely that Sotomayor was going to be the one. She is a very eminent judge. She would be the first Hispanic judge. She brings a certain bipartisan aura because she was originally appointed to the federal district court by the first President Bush. But President Obama has often spoke of the fact that he thinks people who are not judges should be appointed to the Supreme Court; people who are governors, who are politicians. And certainty he gave that possibility serious consideration. But in the end, he decided to pick one more federal appeals court judge to complete the all nine lineup on the court of all appellate court judges... Yes, it is possible he will have more appointments, but you never know. And he's had one so far. And this looks like a very solid pick, someone who will probably have very little trouble getting confirmed. And who will be a voice like David Souter for moderate liberalism.

Holmes: Moderate liberalism. That's what Harvard Law Professor Alan Dershowitz told us earlier. He described her as moderate and to the left. Is that about right?

Toobin: I would say that's right. You never know for sure, because circuit court judges are bound by Supreme Court precedent. Supreme Court justices are less bound by Supreme Court precedent, so they have a little more running room. They get to expose their own inclinations to a greater degree than circuit court judges. So certainly she will be to the left on the court, with the three other liberals on the court - John Paul Stevens, Stephen Breyer and Ruth Bader Ginsburg. We'll see how liberal she is. I don't think anyone can know for sure. She probably doesn't even know at this point.

Toobin: Certainly based on what's known about Judge Sotomayor currently, I can't imagine any problems with confirmation. She has been a very distinguished judge for now pushing 20 years. Certainly there may be decisions that people disagree with, but there have been no ethical controversies involving her, no scandals. As John McCain liked to say, elections have consequences. And President Obama has picked someone who more or less reflects his own political views. He will likely have 60 votes in the Senate in the Democratic Party by summer. It just seems based on what's known now that this would be inconceivable as a defeated nomination.

Editor's note: Jeffrey Toobin is a CNN senior analyst and a staff writer at The New Yorker. A former assistant U.S. attorney, Toobin is the author of several critically acclaimed bestsellers, including "The Nine: Inside the Secret World of the Supreme Court" and "Too Close to Call: The 36-Day Battle to Decide the 2000 Election."