In the wingnut view of the world, there is no accusation too extreme and no problem that can’t be solved with a demand for the president’s resignation. Need new proof? Take a look at this week’s wingnuts – Tom Tancredo and Ted Rall.

The debate over the Sotomayor Supreme Court nomination took an unexpected turn this week, with Republicans on defense after accusations of racism started sounding wingnutty even to some supporters.

Tom Tancredo’s comments were case in point. The creationist former Colorado congressman and self-styled anti-illegal immigrant crusader took to the airwaves and managed to conjure up not one but two howlers in the space of days.

Judge Sotomayor is a member of the National Council of La Raza, the country’s largest Hispanic civil rights organization, which counts among its 300 major sponsors companies like Wal-Mart. Even if you disagree with their prescription for immigration reform, it sounds pretty legit, right? Not in the world according to Tom Tancredo, who took an opportunity on CNN to describe the organization as “nothing more than a ... Latino KKK without the hoods or the nooses.”

KKK comparisons are just short of Nazi comparisons in the hierarchy of out-of-bounds political metaphors. The KKK is the KKK – full stop. Unless there are actual lynchings involved, it’s best to back off.

But maybe Tancredo was just having an off moment, spurred by emotional scars from the immigration debate. He quickly surrendered any benefit of the doubt when he was asked by David Shuster on MSNBC whether he thought “the Obama administration hates white people.” Tancredo couldn’t quite bring himself to sound reasonable even in the face of that logical softball, pausing for thought and then saying “I don’t know.” When incredulously pushed again, Tancredo laid his cards on the table: “I have no idea whether they hate white people or not!”

Really? This would be news to the millions of white people who voted for Obama, let alone the white members of his cabinet and staff – to say nothing of the members of his mother’s family. For all the wingnut hocus pocus during the campaign, (remember the “Obama is the anti-Christ” emails?) the closest to this conspiracy theory was the Pennsylvania McCain volunteer who carved a “B” on her face, claiming she was assaulted by a black Obama supporter. Note to Republicans: Give the obsession with race a rest.

END_OF_DOCUMENT_TOKEN_TO_BE_REPLACED

Is the middle class dead?

Danny Borden has been a steelworker in Cleveland, Ohio, for the past 32 years. But last month, he was laid off from his job at the Arcelor Mittal plant. It wasn’t the first time he was furloughed. This time, he has a feeling he won't be going back to work.

“Angry?” he asks. “I'm very angry, you know, but I just can't let the anger get to me.” Along with his job, Borden lost his his way of life – the daily freeway drive, the banter with co-workers he’s known for decades, and of course, his economic status.

Is Borden right? Is the middle class extinct?

“What you have is real fear,” says Paul Sracic, head of the Political Science Department at Youngstown State University. “You’re in a point of transition. The manufacturing jobs that have traditionally been here and been available to people, everyone knows they’re not going to be there anymore. I think people would be a bit more secure though if they had some confidence that something was going to be there to replace it.”

Lawrence Mishel of the Economic Policy Institute, says, “we have to start creating jobs and we have to work on creating good jobs for people so they can start earning good family paychecks and increase their consumption based on that.”

But, Borden doesn't see that happening in Cleveland. He says it will be hard for a fellow coming out of high school these days to find a job that would enable him to buy a car, a home and raise two college-bound kids.

“I hear everybody talk about jobs but where are they at? Because they're not up here, so I don't know where they would go,” Borden says.

He’s been hearing about "green jobs" replacing manufacturing jobs one day. But, those jobs pay around 12 bucks an hour-60 per cent less than what someone like Borden would make in the plant. It may be too late, he adds.

“The blue collar jobs are gone, and they’re gone overseas. And we’re giving the people that take the jobs overseas, we’re giving them tax breaks and all kinds of money to ruin America. That’s the way I look at it, so we’re rewarding everybody for taking American jobs away.” 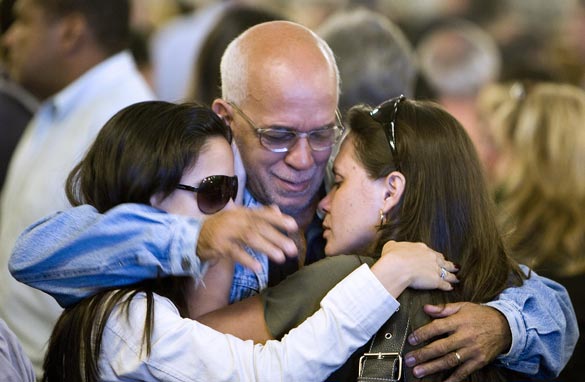 Friends and relatives of the Air France flight 447 passengers comfort each other after attending a mass in their homage at the Candelaria Cathedral on June 4, 2009 in Rio de Janeiro, Brazil. Getty Images