Editor's note: Ted Danson is an Emmy Award-winning actor, a founding board member of Oceana, the world's largest international organization dedicated solely to ocean conservation, and narrator of a new film, "End of the Line." For more information about Oceana, read here.

Ted Danson says a 'closed' sign on a beach led him on a 20-year quest to save the world's oceans.

By Ted Danson
Special to CNN

(CNN) - Today, Monday, June 8, we recognize the first U.N.-sanctioned World Oceans Day. The event comes after years of pressure from conservation groups and thousands of activists who clamored for everyone to know and understand what's happening in our oceans.

I became an ocean activist in 1987. It was the fifth year of "Cheers" and my family moved into a neighborhood that was on the water, in Santa Monica, California. One day I took my daughters to the beach to go swimming, but it was "closed" and I couldn't answer my daughter's question why.

That's really how it started. That and "Cheers" was paying me a lot of money and I felt I had better be responsible with it. So, I started to get involved.

It turned out in our new neighborhood there was a fight to keep Occidental Petroleum from drilling 60 oil wells on Will Rogers State Beach in Los Angeles. They wanted to slant drill into the Santa Monica Bay. The fight was led by a man named Robert Sulnick and we became great friends and found a way to beat them.

We enjoyed ourselves so much that we wanted to continue this work. So Robert Sulnick and I, full of passion and naiveté, started American Oceans Campaign, which ultimately became a part of Oceana. And, here I am, still at it, 20 years later - because our oceans are in trouble. 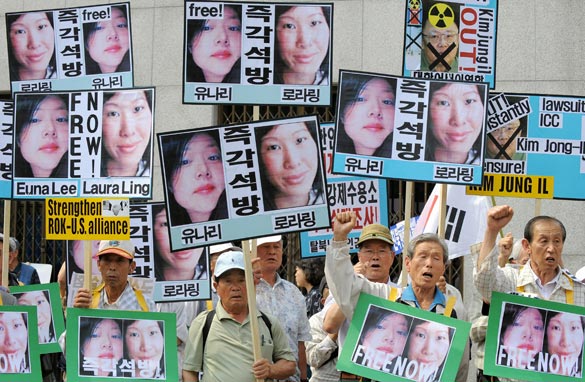 South Korean conservative activists hold up pictures of US journalists Laura Ling and Euna Lee, detained by the authorities in North Korea, during a rally calling for their freedom in Seoul on June 4, 2009. Getty Images
Here are the big stories on the agenda today:
newer posts »

5:44 pm ET February 16, 2020 RETWEET
RT @Laurie_Garrett: @AliVelshi New: My take on how tightly the official tallies of the #COVID19 epidemic in China have tracked with politic…
alivelshi