Pregnant with girl or boy? At-home test may tell you

IntelliGender makes a gender prediction test. If a urine specimen turns orange, it's a girl. Green is for boys.

(CNN) - Expecting moms can determine whether they're carrying a boy or a girl as early as 10 weeks after conception, according to an over-the-counter gender prediction test by a Plano, Texas, company.

IntelliGender, the creator of the "Boy or Girl Gender Prediction Test," say scientists isolated certain hormones that when combined with a "proprietary mix of chemicals" react differently if a women is carrying a boy or a girl.

It claims that within 10 minutes of taking the urine test, a mother will be able to tell her baby's gender. The specimen will turn green if it's a boy, and orange if it's a girl.

IntelliGender would not say what hormones or chemicals it uses it in its test because of a pending patent.

"Most parents have a great degree of curiosity to find out if they're having a boy or a girl, and it can be so excruciating to wait until the 20-week sonogram to find out," IntelliGender co-founder Rebecca Griffin said. "But the test was never meant to be a diagnostic tool. We don't claim 100 percent accuracy."

In fact, the company's Web site specifically says to not "paint the room pink or blue" until an expectant mom confirms results with her doctor.

"We specifically state to all our consumers that they shouldn't make any emotional or financial steps until the results are confirmed via sonogram," the company says.

The gender predictor test boasts a 78 to 80 percent accuracy rate, according to the latest IntelliGender report.

Coldplay's “Viva La Vida” is more than just their biggest hit – it's a phenomenon – selling a whopping 6.8 million copies, according to the International Federation of the Phonographic Industry. Guitarist Joe Satriani has filed a lawsuit claiming copyright infringement, saying the mega-band copied his song “If I Could Fly,” from 2004, to create their mega-hit. In court documents, Coldplay has denied those allegations.

Satriani, famous himself in the world of rock – now plays in the band, Chickenfoot, with Sammy Hagar. Hagar lays on the sarcasm in support of Satriani. “I was shocked to that Joe would steal that song from those guys,” Hagar said. “Joe you just took and erased the singing and the lyrics and made an instrumental out of it.” “And somehow, I did it four years earlier,” Satriani quipped.

The case has captured the imagination of YouTubers all over the world – most of whom are more than eager to prove Satriani right. One posting, a note-by-note analysis, by a Canadian guitar teacher has gotten nearly 700,000 hits. Then there are the “mash-ups,” where YouTubers put Coldplay's lyrics over Joe Satriani's guitar riff. Some of this stuff is so cleverly done it's gotten the attention of Satriani's attorney.

“What is fascinating about YouTube is you get 1,000 good ideas as a lawyer you could adopt and use in court,” attorney Howard King says.

But, musicologists, like Prince Charles Alexander, who's produced records for Mary J. Blige and Usher, say mash-ups can be deceiving. “You don’t pick up the guitar and invent music. You actually are inspired by someone else that played,” says Alexander, who teaches at the Berklee College of Music in Boston. “So you as an outsider who are mashing these two records up and saying "Wow look how similar they are," are actually looking at a process that's been going on for a very long time.” Alexander says you can mash-up many well known and make them sound the same.

Coldplay’s lawyer told us the band can’t comment on pending litigation. However, Coldplay front man Chris Martin wrote on the band's website, it was, "initially a bit depressing" but now it’s “inspiring." And he adds: “Now we've got more to prove than ever before.” 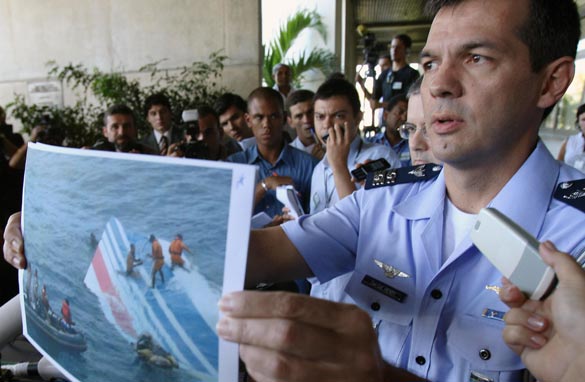 Brazilian Air Force officer Henry Nunhoz shows a picture during a press conference to announce the recovery of more bodies of the 228 victims of the of the Air France A330 aircraft lost in midflight over the Atlantic ocean June 1st, in Recife, Brazil on June 8, 2009. Getty Images