Editor's Note: American Morning’s Wednesday audience strongly opposed Senator McCain’s remarks about the Iranian election, equating it to “asking the loser in the Super Bowl how to play a winning football game,” and calling him a hypocrite: [His] “newfound concern for the human rights of Iranians is laughably absurd – those are the very same humans he joked about Bomb-Bomb-Bombing, remember?”

How do you feel about Senator McCain’s comments regarding the Iranian election? Is he a “hypocrite” as one viewer suggests, or does he provide a deeper insight than has previously been addressed?

END_OF_DOCUMENT_TOKEN_TO_BE_REPLACED 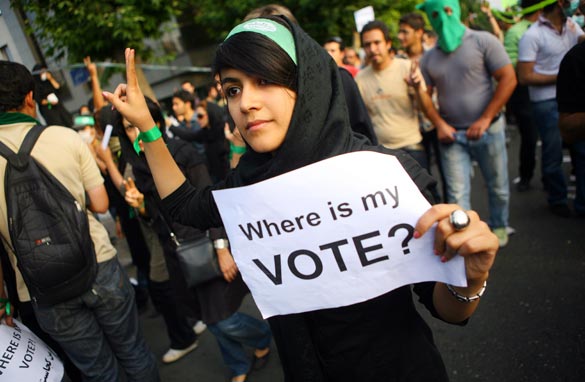 Opposition leader Mir Hossein Moussavi, who claims last week's re-election of President Mahmoud Ahmadinejad was rigged, called on his supporters to join him on the streets of Tehran Thursday in the latest in a series of demonstrations.

Meanwhile, the country's powerful Revolutionary Guard - which enforces strict Islamic codes - said it will prosecute Web sites it accuses of inciting riots, adding to a ban on foreign media reporting on the protests and a block on Internet site such as Facebook or Twitter.

Even as the Guard made its announcement, thousands of Iranians planned to head to Haft-e-Tir Square in central Tehran on Wednesday evening despite a stepped-up government crackdown that has seen people arrested across the country. Video Watch Christiane Amanpour on media restrictions »

The scale of the protests, the worst seen in the country since a 1979 revolution overthrew its monarchy, Tuesday prompted Supreme Leader Ayatollah Ali Khamenei, who has already endorsed Ahmadinejad's win, to appeal for calm, urging citizens to support the Islamic state.

His appeal came a day after at least seven people were killed during a pro-Moussavi demonstration in Tehran.

"On this issue, I do not believe that the president is taking a leadership that is incumbent upon an American president, which we have throughout modern history, and that is to advocate for human rights and freedom — and free elections are one of those fundamentals," the Arizona Republican told John Roberts on CNN's American Morning.

President Obama Tuesday said that he has deep concerns over the election results in Iran, but stressed that "it's not productive, given the history of U.S.-Iranian relations, to be seen as meddling, the U.S. president meddling in Iranian elections."

McCain disputed that assessment. "We're not meddling in any country's affairs when we call for free and fair elections and the ability of people to exercise their human rights," he said Monday. "And when they disagree with a flawed or corrupt election, as the Iranian people have, [not] to be beaten and even killed in the streets."

Armies of new Avon ladies are lining up in this thinning economy. Some were bankers. Some were stay-at-home moms. All are trying to get ahead or stay afloat in a down economy.

When you hear about companies like Avon, Mary Kay and Tupperware you may think throwback to the 1950's. But direct selling is back in a big way.

Many women are ringing doorbells again as a “second" job, hoping to make extra cash in this bad economy. Remember the old Avon commercials: "Avon, calling at your door." Ding, dong. "Avon calling!"

The Avon lady is back...with a twist. Its new commercial stresses the economic downturn and how selling Avon products can make you feel more financially secure, touting it as "a business you can count on."

And these days, more and more Americans are agreeing and turning to direct selling.

END_OF_DOCUMENT_TOKEN_TO_BE_REPLACED

[cnn-photo-caption image= http://i2.cdn.turner.com/cnn/2009/images/06/17/intv.sadjadpour.art.jpg caption="Karim Sadjadpour tells CNN's John Roberts that Iran's supreme leader may be faced with a dilemma to sacrifice himself or President Ahmadinejad."]

Pressured by a fourth day of street protests, Iran is clamping down. Reporters have been confined to their rooms and they're jamming phones and radio transmissions in Iran.

Karim Sadjadpour is an Iranian expert with the Carnegie Endowment for International Peace. He joined John Roberts on CNN’s “American Morning” Wednesday.

John Roberts: Where do you see this ending?

Karim Sadjadpour: It’s difficult to say, John. A lot of it depends on what the opposition leaders decide they want to do. Certainly there's a tremendous sense of outrage in Tehran. Not only in Tehran, throughout the country there’s a tremendous sense of injustice that these young people have. At the same time, it’s a country which endured an eight-year war with Iraq. People are allergic to the prospect of further carnage and bloodshed and violence. But at the moment, I think there's truly a sense of outrage and I see these protests continuing.

Sadjadpour: They're playing a definitive role. But what’s been amazing is they haven't dissuaded people from going in to the streets. Historically, when the regime has announced that the Basij and the Revolutionary Guard are authorized to use force to shoot people, that will quell the protests. But so far, we haven’t seen the protests really quelled. The other day there were several hundred thousand people in Tehran. And it just gives you an idea of how outraged people feel that they're willing to go out in to the streets and risk their lives.