Her name is Zahra Rahnavard. There are Iranian women who say she is their nation’s Michelle Obama.

Rahnavard is smart (2 Ph.D’s), well-written (15 books), and a trend setter (the first Iranian woman to head a university since the 1979 Islamic Revolution.

In a nation that separates and carefully monitors women, Rahnavard has been an inspiration to women seeking to modernize Iran, end discrimination, and give women many of the rights taken for granted in the West.

It’s not an easy task.

Under President Mahmoud Ahmedinjad's regime, activists say dozens of women have been jailed for participating in a grass-roots women’s rights campaign called, One Million Signatures.

Rahnavard also is the wife of defeated Iranian presidential candidate Mir-Hossein Mousavi, who is seeking to overturn the June 12 presidential election that he and his supporters say was rigged to re-elect President Ahmedinejad to a second term.

During the campaign, Rahnavard did some very un-Iranian things that seem commonplace in the West.

She held her husband’s hand in public. And she campaigned for him. Alone. Rahnavard drew huge crowds at rallies in which she urged voters to vote for change and vote for her husband.

Iranian women looking for inspiration to change their world loved it.

Azar Nafisi, author of “Reading Lolita in Tehran”, a best selling book about the erosion of women’s rights in Iran, says that Rahnavard has given women there a voice to protest their second class citizenship. Nafisi says Iranian women “see in her the potential of what they want.”

Perhaps most revealing of Rahnavard’s influence, during one of the televised presidential debates, Ahmedinejad turned her into a campaign issue by (falsely) accused her of not being qualified to teach. The President said “...she got PhD without attending the university entrance exam and now she is an assistant professor without having qualifications...this is lawlessness.”

Rahnavard shot right back the next day, holding a news conference to accuse Ahmadinejad of humiliating women, betraying the Iranian revolution, and seeking “to destroy his rival through lies.”

Ahmedinejad may never have heard the lyrics to Helen Reddy’s 1972 song, “I am woman, hear me roar,” but with Zahra Rahnavard on the scene he pretty much gets the gist of it.

Bollywood on a budget 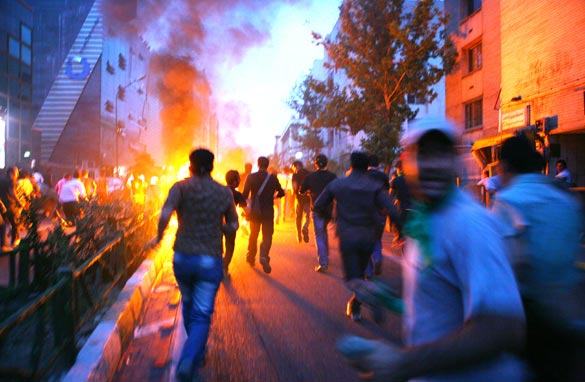