Editor's Note: With President Obama’s prime time health care address on Wednesday evening, American Morning’s Thursday audience intently scrutinized the health care segments. Bill Bennett was ardently rejected as an appropriate spokesman on the topic, as his statistics and credibility were called into question. Others remarked that conservatives were against health care because they can afford coverage.

How do you feel about Mr. Bennett’s comment regarding health care? Do you believe that health care quality will suffer under the universal plan being proposed by the Obama Administration?

END_OF_DOCUMENT_TOKEN_TO_BE_REPLACED 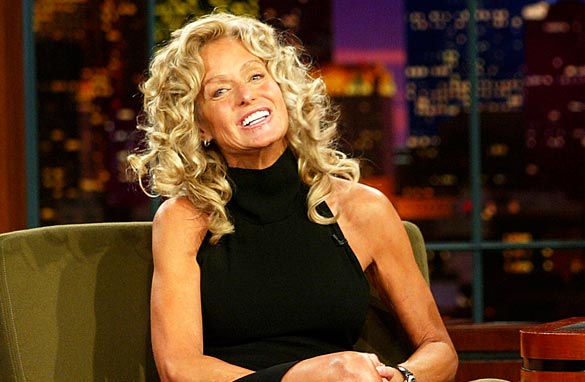 Actress Farrah Fawcett appears on 'The Tonight Show with Jay Leno' at the NBC Studios on September 10, 2003. Getty Images

(CNN) - Farrah Fawcett, the blonde-maned actress whose best-selling poster and "Charlie's Angels" stardom made her one of the most famous faces in the world, has died. She was 62.

Farrah Fawcett rose to fame in the 1970s, thanks to a best-selling poster and the hit show "Charlie Angels."

"She stays in bed now. The doctors see that she is comfortable. Farrah is on IVs, but some of that is for nourishment. The treatment has pretty much ended," he said in a story posted May 7.

The exact cause of the DC Metro crash is still unknown. Part of the cause could be faulty control circuits and authorities are asking, are some of the cars just too old to be on the tracks? CNN's Jeanne Meserve reports.

South Carolina Governor Mark Sanford has joined the growing list of high-powered politicians who are seemingly powerless against temptation. Are we seeing a pattern here?

Governor Mark Sanford was a rising Republican star before yesterday's stunning admission that he was having an affair. But does his bad behavior reflect on the Republican Party as whole? Is there a credibility issue?

Bill Bennett is a CNN political contributor and radio host of “Morning in America.” He spoke with Kiran Chetry on CNN’s “American Morning” Thursday.

Kiran Chetry: These are things people just don't want to hear about in the midst of huge domestic problems. South Carolina has a double digit unemployment rate of 12.1% right now. Governor Sanford became the face of opposition to wasteful spending. And now his constituents find they were left in the lurch. He was in South America with his girlfriend. How does that affect the credibility of conservatives?

Bill Bennett: It doesn't help in South Carolina at all obviously and it doesn't help the Republican Party. I don't know about conservatives but it sure hurts the Republican Party. It's just too much of this, too many of these. Family values are an important part of American life. The Republican Party was founded to combat, as we said in 1854, the twin relics of barbarism – slavery and polygamy. So that was a stand for family values. But it hurts the party when you have so many, if you will, defecting from the cause. Mark Sanford was regarded as a future leader, not anymore. It’s a sad and regrettable thing. Obviously it happens on both sides. But Republicans do hold these values dear. It’s part of our charter. So it's a hurtful and harmful thing, there’s no question about it.

Chetry: You're right, it does happen on both sides. The reason I'm asking about the problem is because it's been a bad few weeks for the GOP. We heard also from Nevada Senator John Ensign, he admitted to an affair. Both of them are conservatives. And both of them not afraid to inject morality into the public discussion so then the question of hypocrisy comes in. How do you maintain that credibility when there seems to a double-talk problem?