LOS ANGELES, California (CNN) - The will and the wake.
[cnn-photo-caption image= http://i2.cdn.turner.com/cnn/2009/images/07/02/jackson.will2.art.jpg caption="Michael Jackson's will, made public Wednesday, placed his entire estate in a family trust."]

Amid the frenzy of confusing and conflicting information that has followed the death of Michael Jackson, Wednesday began with clarity on two fronts. The day ended, however, with more questions than answers.

A federal law enforcement official said Wednesday night that the Drug Enforcement Administration had joined Jackson's death investigation, once again fanning speculation that drugs may have been involved in the pop icon's passing.

Earlier in the day, the Jackson family said they would not hold a public or private viewing of his body at Neverland Ranch, as had been reported. They didn't indicate where else or when such a ceremony would be held.

And though Jackson's will, made public Wednesday, placed his entire estate in a family trust, the document that described the trust was not filed in Los Angeles Superior Court.

"He was such an enigma in life, why would we expect him to be anything different in death?" said Antoni Devon, a Jackson fan who huddled with other music lovers at a makeshift memorial for the singer outside Grauman's Chinese Theatre in Hollywood.

Last year, Wendell Potter stepped down from his post as the chief spokesman for the health insurance giant, Cigna. Potter tells CNN he is finished with defending an industry he calls “beholden to Wall Street.”

At a hearing last week before the Senate Commerce Committee, the former vice president of corporate communications at Cigna testified, “I know from personal experience that members of Congress and the public have good reason to question the honesty and trustworthiness of the insurance industry."

The committee’s chairman, West Virginia’s democratic Senator Jay Rockefeller told Potter, “you are better than Russell Crowe on ‘The Insider,’” referring to the award-winning 1999 film about cigarette company executive Jeffrey Wigand who blew the lid on the tobacco industry’s practices.

In his testimony and in an interview with CNN, Potter described how underwriters at his former company would drive small businesses with expensive insurance claims to dump their Cigna policies. Industry executives refer to the practice as "purging," Potter said.

“When that business comes up for renewal the underwriters jack the rates up so much the employer has no choice but to drop insurance,” Potter said.

CNN obtained a transcript of a 2008 Cigna conference call with investors in which company executives use the term “purge.”

But in an email to CNN, Cigna spokesman Chris Curran denied the company engages in “purging.”

END_OF_DOCUMENT_TOKEN_TO_BE_REPLACED

While the military has instituted dozens of programs to help troubled soldiers with post traumatic stress, brain injuries, and other problems, a number of troops at Fort Hood have privately told the nation’s top military officer they feel they are treated poorly because they are wounded, ill or injured.

In an April 19 confidential memo to Defense Secretary Robert Gates, the Chairman of the Joint Chiefs of Staff, Admiral Michael Mullen, outlined a number of problems he observed during a trip to several military locations in Texas days before. CNN obtained the memo from a military source, and both the Army and Mullen staffers confirmed its authenticity.

During the visit Mullen met privately with about 30 wounded troops at Fort Hood. “The wounded expressed concern that, at Fort Hood, they were stigmatized and treated as lesser Soldiers (sic) for being wounded, ill, or injured.” The troops had previously been treated at Brooke Army Medical Center where they said they were a higher priority for that staff, than the Army staff at Fort Hood.

END_OF_DOCUMENT_TOKEN_TO_BE_REPLACED 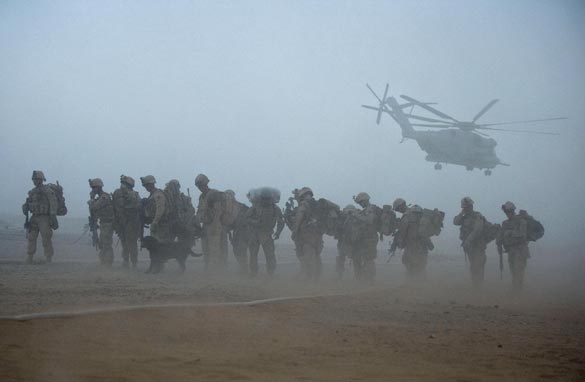 US Marines wait for helicopter transport as part of Operation Khanjar at Camp Dwyer in Helmand Province in Afghanistan on July 2, 2009. Getty Images