Editor’s Note: The economy remained at the forefront of concern for Thursday’s American Morning audience, as most felt the GOP was “playing politics” with the economy instead of working with President Obama and the Democrats to fix the problems.  Many blamed the Bush Administration for the country’s poor financial health.

On Wednesday, Congressional Republicans tore into the Obama Administration over its implementation of the economic stimulus plan, arguing that the White House is mishandling the distribution of the money while dramatically overstating the ability of the package to create jobs.  What do you think the next steps should be regarding the current stimulus or an additional stimulus package?  Is the U.S. acquiring so much debt that we’re headed for our country’s bankruptcy, or is spending the appropriate approach?  How do you feel about the stance of the GOP, saying that President Obama’s stimulus package has not created enough jobs?  Are they correct in this assertion?

END_OF_DOCUMENT_TOKEN_TO_BE_REPLACED

On Capitol Hill, a scathing letter has gone public. It’s from House Democrats who say the CIA hid intelligence from Congress and misled lawmakers for eight years after 9/11. Shockingly, the source is their boss, CIA Director Leon Panetta.  It begs the question, should we expect the nation's top spy agency to keep some secrets?

Joe Johns: Let's look at the letter that's been making the rounds so far, it says recently you testified that you've determined that top CIA officials have concealed significant actions from Congress from 2001 to this week. This comes from six democratic members of congress. What do you make of that letter?

Townsend: You know, Joe, I think because of the controversy over the Nancy Pelosi briefings, people are going to put these things together. This morning I spoke to both White House and CIA senior officials who confirm to me that these two issues, the Pelosi briefings, which Panetta made perfectly clear she had been briefed honestly and fully and this issue are completely unrelated. These are two separate issues. What happens is oftentimes the CIA and other agencies will go up and do briefings. They'll go back and realize they inadvertently left information out. Things they were unaware of that they didn't tell Congress. You want them to come back up. I suspect what happened here is, they realized there was something that was not included in the briefing and they did the right thing – they notified the Congress. We got to be careful with Congress issuing letters on intelligence matters and playing politics with the intelligence community. It may have just the opposite effect of what they want, which is full and complete information.

Johns: Let’s dig a little deeper on that. If you step away, back away from it, you know one thing, Pelosi challenged the veracity of the CIA. She challenged the fact that they were being truthful. Now you look at this letter that comes out. Even though we don't know all of the between-the-lines information, does it look like she is vindicated? Should she be vindicated? Or does it just look like her colleagues in the House are trying to make it look like she's vindicated.

Townsend: I think it's the latter, Joe. I think her colleagues are playing politics with this to try to make her look vindicated. CIA issued a statement through a spokesman yesterday making clear that Leon Panetta, the director of the CIA, stood by his statement issued in May related to the Nancy Pelosi briefing. That's done. It's clear that she was briefed. It is clear CIA fulfilled their obligations there. This is a separate matter. That’s why I say it's very dangerous for the House of Democrats to be playing politics with the intelligence community; when you want them to do, if they’ve made a mistake as an oversight matter, is come up and tell you about it. I really think this is a pretty dangerous game they're playing.

Johns: There’s also a behind-the-scenes fight going on right now on Capitol Hill as to whether more people on the Hill should be privy to certain information that comes out of the intelligence community or whether just that gang of eight, certain specific individuals on Capitol Hill who get to see this stuff, should continue to see the stuff. Do you think that’s part of the politics of this letter coming out?

Townsend: I think you're right to raise it. I suspect it is. We should tell our viewers that the administration has issued a statement that the president’s senior advisor will recommend he veto the legislation if the briefing numbers are expanded. The reason for that is, we understand the more people that know, the more likely it is that critical information and classified information will leak. It's very dangerous. What you want is an effective oversight by the people who know the most and have responsibility in the area. That’s why there's the gang of eight. But you don't need 40 members all knowing this critical and classified information that may put lives at risk if it leaks.

FDNY firefighters are now training on the world’s first high rise fire simulator, and they took us along for a morning of drills at the Fire Academy, or as they call it, “The Rock.”

The building simulates conditions unique to high rise fires: a person stuck in an elevator shaft; people stuck in the windowsills of burning rooms, many floors high; rooms with old or poor ventilation; apartments and offices illegally divided into very small rooms.  And while the building itself is only five stories tall, the drills require engine companies to react as if they are 40 or 50 stories off the ground (there’s a trampoline on the side of the building, but they’re not allowed to jump off the roof.)

As many as fifteen times a day, they set the building on fire with a remote control.  Deb got to play victim as one squad company practiced a rope rescue from the fourth floor.

Until the simulator was built, firefighters practiced on unused portions of working office buildings (imagine sitting at your desk and seeing a firefighter repelling from the roof past your window).  Worse yet, they only got to do it a couple of times a year and it wasn’t real fire - they would practice without smoke or water.

The academy looks like something out of Hollywood. They have fake street scenes, burnt down busses, and a full-fledged subway station for firefighters to practice rescuing people stuck beneath subway trains (I crawled under one of the subway cars and there really is headroom if you get stuck under one…but I’m glad the FDNY is practiced on getting folks out of there.) Check out the videos and our exclusive behind the scenes photos. 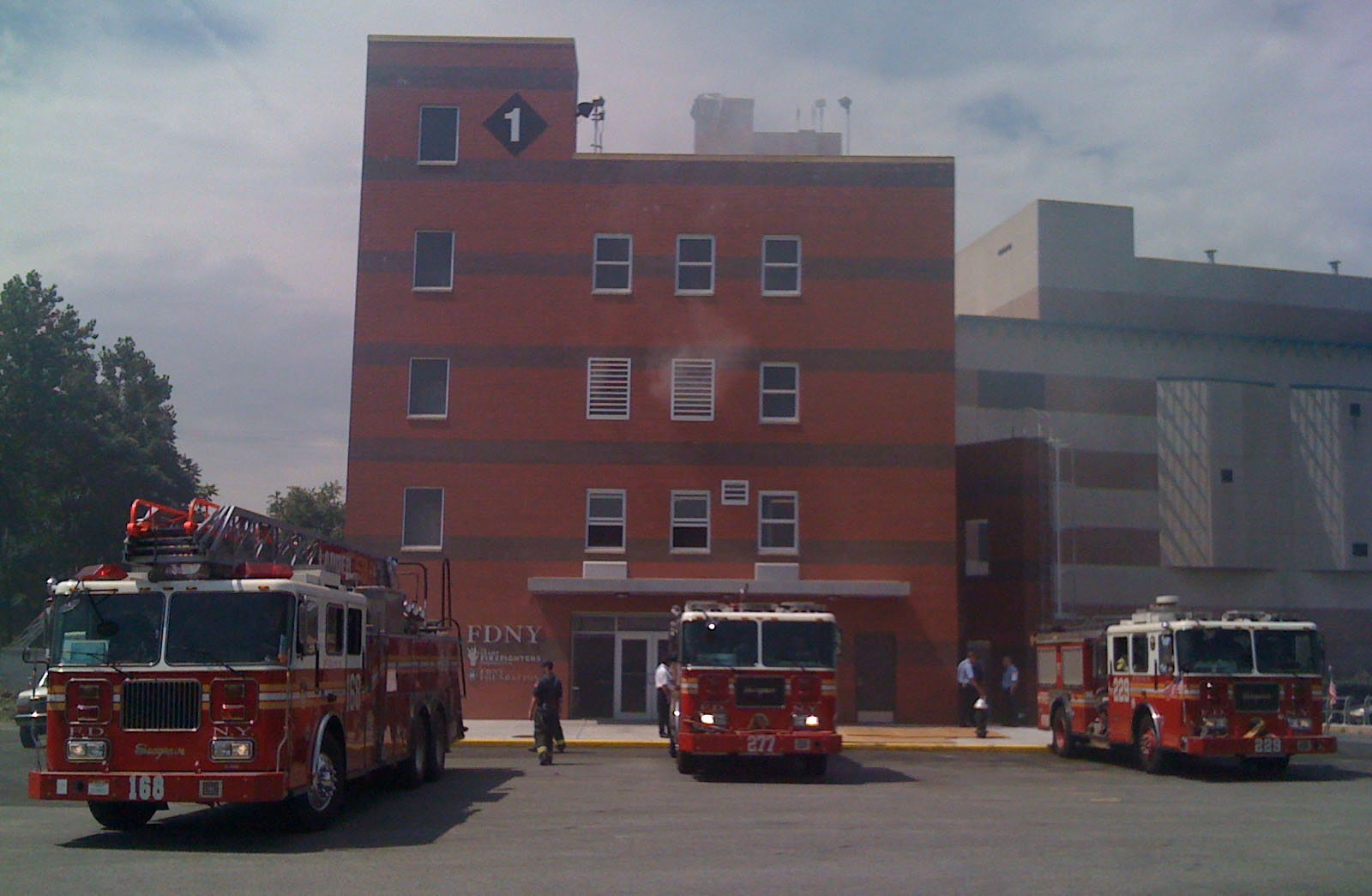 On site at the nation's first fire simulator on Randall's Island, NY 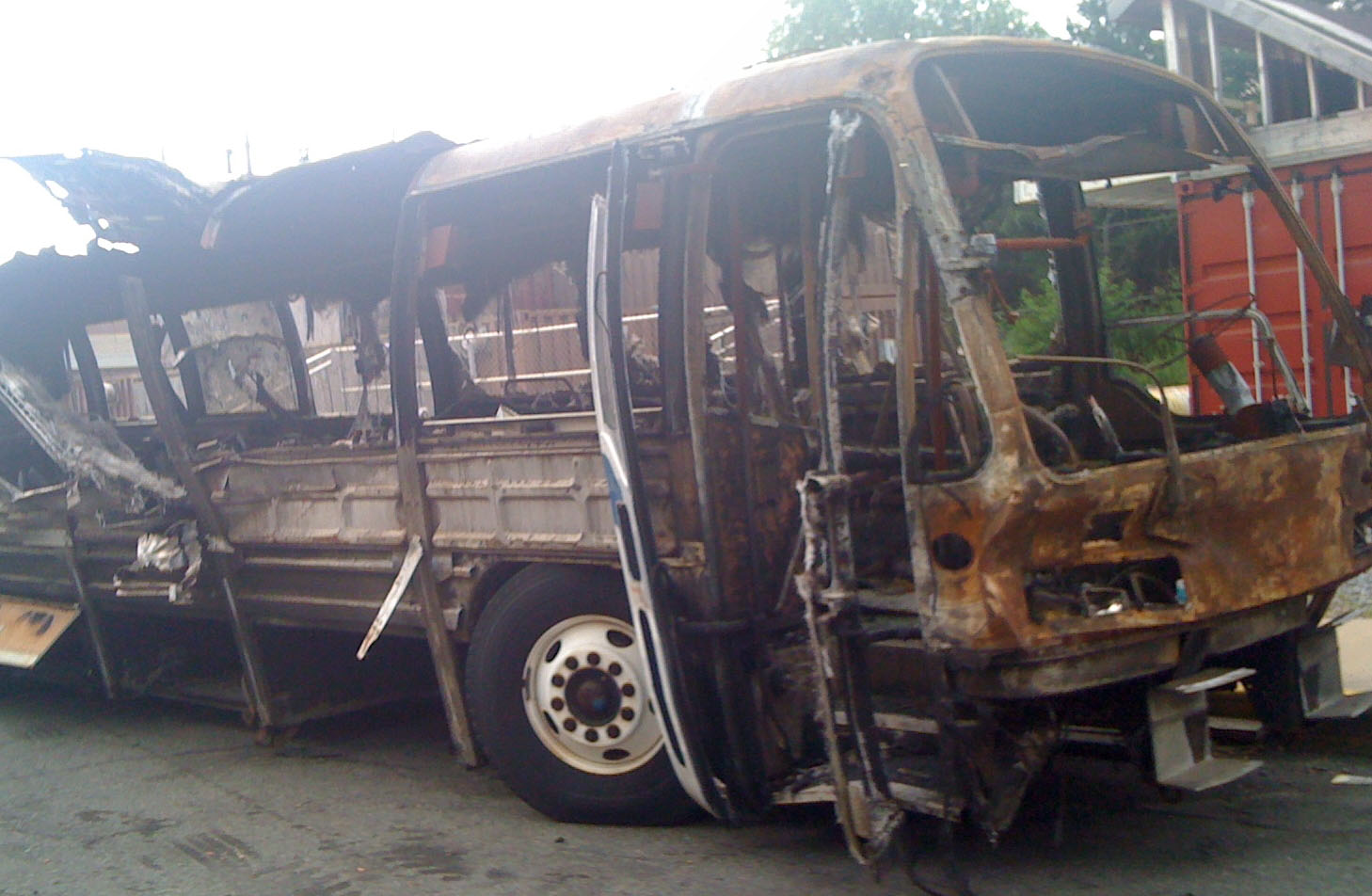 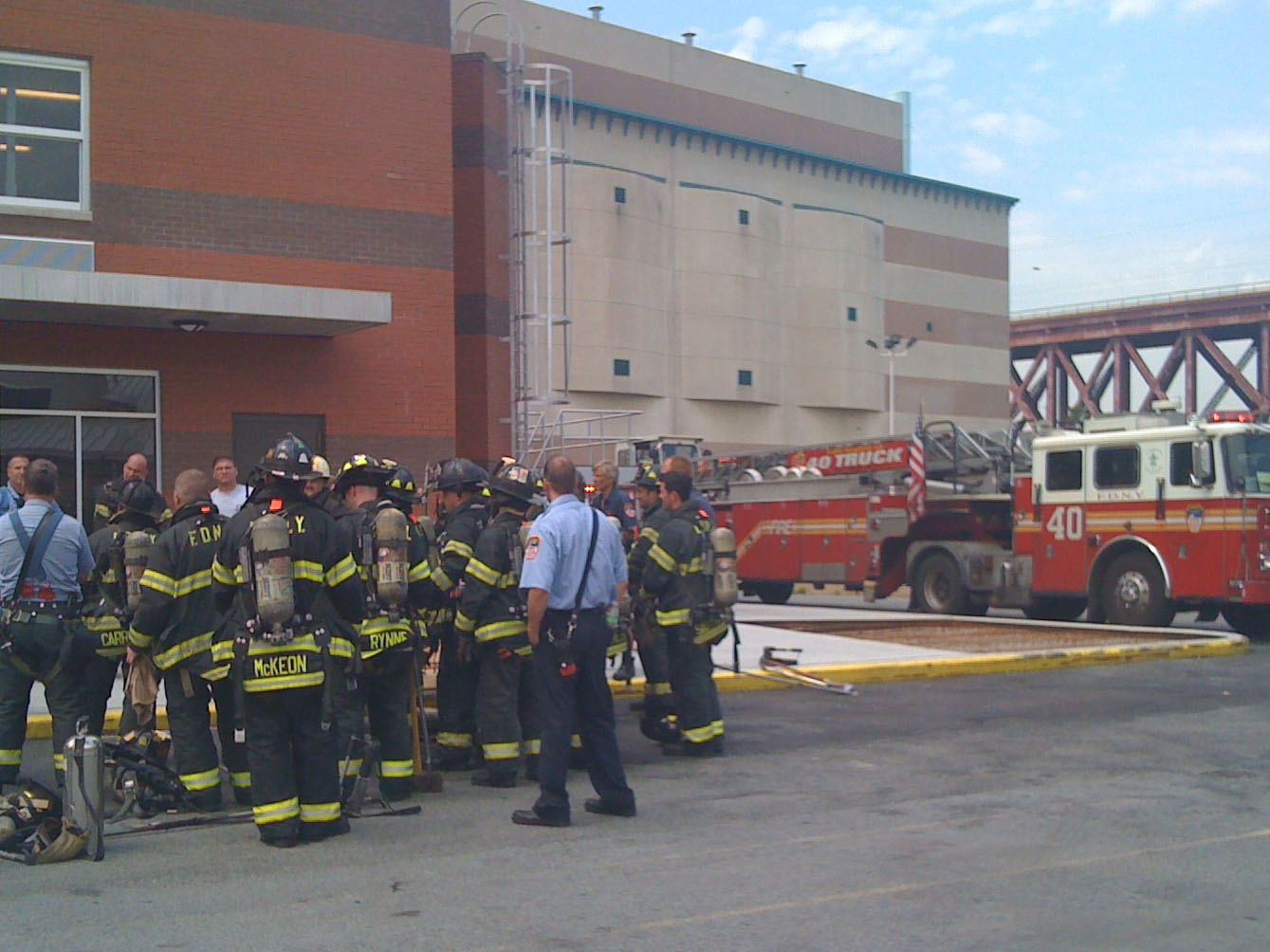 Firefighters in front of the simulator

Actor Denis Leary and the Leary Firefighters Foundation partly backed the project, with the rest of the funding coming from the Department of Homeland Security. Watch our one-on-one interview with Leary. 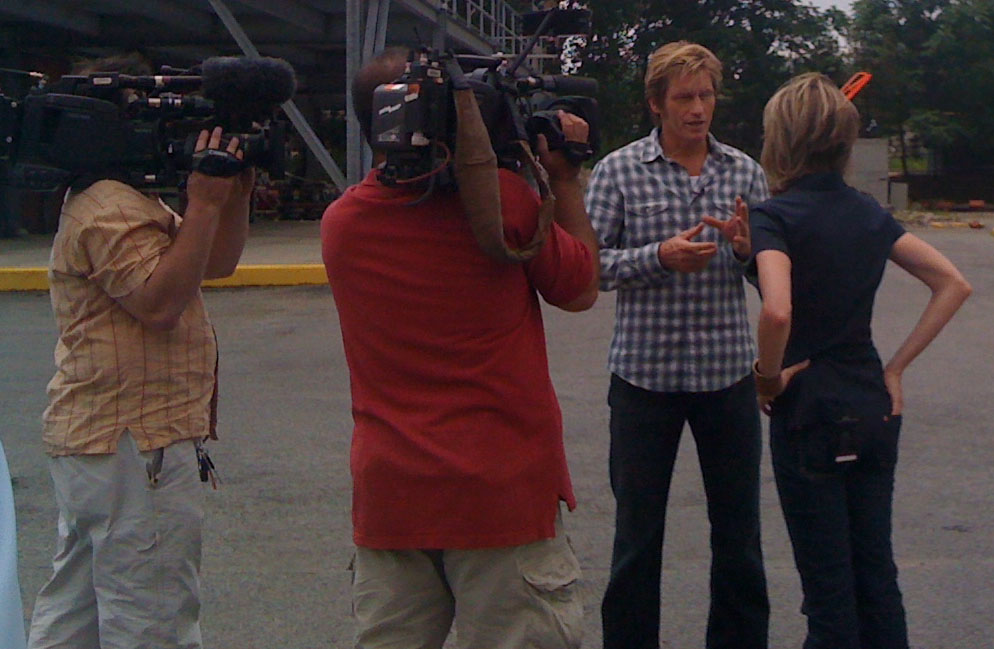 Every day, all day, different ladder and engine companies come through the facility to train on simulated fires.

The FDNY took us through a drill with a ladder company to see them in action: we saw them combat flames over head, kick doors down, do a gurney rescue down an elevator shaft, and climb through windows.

The facility was the subject of an international symposium in March, where fire fighters from around the country came to learn about the facility to replicate in their own cities, easily applicable to Chicago, Los Angeles, Philadelphia and Washington, DC.

END_OF_DOCUMENT_TOKEN_TO_BE_REPLACED

[cnn-photo-caption image=http://i2.cdn.turner.com/cnn/2009/images/07/09/woman.sick.bed.art.jpg caption="Some people who appear to have insomnia are biologically night owls, one expert says."]

(CNN) - If you have a hard time crawling out of bed in the morning, it could be that your body is biologically programmed to start the day later.

A new study examines how morning people compare with night owls on a strength test and looks at what other physiological processes may contribute to their performance.

Researchers tested participants' leg muscle strength at various points in the day. They looked at nine "early birds" and nine "night owls," who were classified as such based on a questionnaire.

Surprisingly, morning people's strength tends to remain constant throughout the day, but night owls have peak performance in the evening, said researchers from the University of Alberta in Canada.

"We thought that morning people would be better at this in the morning, but they never changed," said study co-author Olle Lagerquist, a Ph.D. candidate in neurophysiology at the University of Alberta.

That may be because evening people show increased motor cortex and spinal cord excitability in the evening, about 9 p.m., meaning they had maximal central nervous system drive at that time, Lagerquist said.

[cnn-photo-caption image=http://i2.cdn.turner.com/cnn/2009/images/07/09/iran.protests.anniversary.art.jpg caption="Protests by Iranians, such as this one on June 15, have been defended by the reformist figures."]

TEHRAN, Iran (CNN) - The commander of Iran's security forces warned that police would "strongly confront" anyone planning to protest Thursday, a day that marks the anniversary of a pivotal point in Iran's reformist movement.

In an interview with the state-run Islamic Republic News Agency (IRNA), Maj. Gen. Esmaeel Ahmadi Moghadam said authorities would confront protesters and that no demonstration permit had been issued for Thursday, the 10th anniversary of a 1999 student uprising that, at the time, posed the biggest threat to the Islamic regime since its inception in 1979.

Tehran's governor Morteza Tamaddon issued a similar warning as the police chief Maj. Seyed Hadi Hashemi told IRNA that authorities are trying to encourage people to leave the capital before Thursday because of severe haze.

Hashemi "urged the citizens to consider Tehran's heavy pollution and travel outside of the Capital for the weekend in order to help reduce traffic," IRNA reported.

Iranian-American journalist Jason Rezaian said Iranians were scared after a brutal crackdown on those who protested what they called the fraudulent outcome of the June 12 presidential elections. Hardliner Mahmoud Ahmadinejad was declared the winner over his chief rival Mir Hossein Moussavi, a reformist candidate.