Former President Bill Clinton is in North Korea today. His visit comes more than eight weeks after two American journalists, Euna Lee and Laura Ling, were sentenced to 12 years in prison for allegedly crossing into the country illegally.

Victor Cha was director of Asian affairs at the White House during the Bush administration. He visited Pyongyang with Governor Bill Richardson back in 2007. Cha spoke to Kiran Chetry on CNN’s “American Morning” Tuesday.

Kiran Chetry: Drawing on your experience and extensive knowledge of North Korea, what might be going on in these negotiations with Korean leaders and our former President Bill Clinton?

Victor Cha: Well, I think for the North Koreans … receiving a former head of state gives them a lot of face, political face, which is important to the country and to their leadership. I would imagine that the former president is there solely for the purpose of trying to bring back these two Americans. And he's probably engaging in discussions with the Foreign Ministry as well as with some members of the party, perhaps even the dear leader himself to secure the release of these Americans as a humanitarian gesture by the North Korean government.

END_OF_DOCUMENT_TOKEN_TO_BE_REPLACED

More funding for Cash for Clunkers?

[cnn-photo-caption image= http://i2.cdn.turner.com/cnn/2009/images/08/04/cash.clunkers.ford.gi.art.jpg caption="With the help of the U.S. government's 'Cash for Clunkers' program, Ford Motor Co. reported an increase of approximately 1.6 percent in U.S. sales for July in comparison to the same month last year."]

The Cash for Clunkers program is getting a lot of credit for a surge in July car sales.

Right now, though, the wildly popular program is running on fumes.

If the Senate doesn't approve another $2 billion in funding this week.

The White House says the program will have to be junked.

We want to know what you think about the Cash for Clunkers program. Do you support more funding of the program? Have you used the program? Will you use it? Tell us your thoughts.

Read more: Which clunkers are being traded?

5 things to watch during recess

[cnn-photo-caption image= http://i2.cdn.turner.com/cnn/2009/images/08/04/pelosi.getty.art.jpg caption="Speaker of the House Nancy Pelosi and House Democratic leaders said they are sending members home with written guidance on health care reform legislation, which they hope to pass after their summer recess."]

House Speaker Nancy Pelosi is bracing for what she calls “the fight of our lives.”

Sleepy, sweltering August, typically a month for congressional beach getaways and temperature-taking back in the district, is shaping up to be the critical month for health care reform, with major battles brewing in the Capitol and on the streets in front of members’ hometown offices.

If ever there was a time for a curtain raiser on an intermission, this is it. So here are five things to watch over the most consequential August recess in recent history:

When your product is hard to sell — and health care reform has proven to be the Edsel in the White House showroom — it’s not a bad idea to single out a bad guy, and fast.

Pelosi did so last week with unusual bluntness, declaring outright war on the health insurance industry as her caucus splintered over the controversial public option. The speaker called insurers “villains” and charged them with “immoral” billing and coverage practices.

The question now: Will the insurance industry, which has tried to keep a low profile while maintaining the proverbial seat at the table, commence a big, mean anti-reform counterattack — à la 1994’s “Harry and Louise” ads? 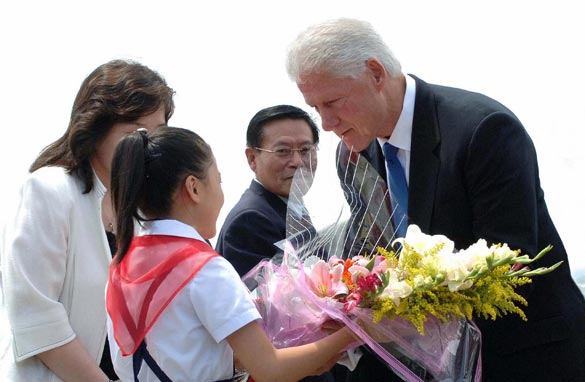