Trapped on a plane all night

Summer thunderstorms can mean airport delays. But how about this?

Forty-seven passengers trapped on a plane that wasn't moving on a runway... all night!

The Continental Express jet was flying from Houston to Minneapolis when storms hit. Then their nightmare began.

Link Christin was one of those passengers and he spoke to Kiran Chetry on CNN's "American Morning" Tuesday.

It's a make or break month for health care reform. President Obama is taking his push to New Hampshire Tuesday where he could find the crowd at his town hall deeply divided.

Dallas Woodhouse is the director of Americans for Prosperity in North Carolina and is against the proposed reforms. His brother, Brad Woodhouse, is the communications director for the DNC and is for the reforms.

[cnn-photo-caption image= http://i2.cdn.turner.com/cnn/2009/images/08/11/goldfarb.michael.cnn.art.jpg caption="Fmr. FAA Chief of Staff Michael Goldfarb says the time is past due to restrict the airspace over the Hudson River."]

Saturday’s midair collision of a sightseeing helicopter and a single-engine plane over the Hudson River killed nine people. That crash is now raising some new questions about air safety over the Hudson and whether or not the FAA should step in.

Michael Goldfarb is the former FAA chief of staff. He says that airspace should be restricted because there is no public safety value in having small aircraft there. He spoke to Kiran Chetry on CNN’s “American Morning” Tuesday.

Kiran Chetry: As we've been learning in the days after this accident, the airspace in this area is virtually unregulated for small planes. And also the very popular sightseeing helicopters can fly under that 1,100 foot ceiling. It’s basically visual flight rules. Is it time for the FAA to start rethinking whether or not there needs to be more regulation in the skies over the Hudson?

Michael Goldfarb: It's way past due, Kiran. They can issue an emergency order this afternoon to airmen and airwomen, restricting that airspace. There's no public safety value having those small aircraft there, basically not under air traffic control, on their own. Some pilot described it that he had an electronic box in his aircraft, like a GPS. Every time there was a plane that came near him or a helicopter or some other kind of vehicle, it would squeak traffic and it was a constant traffic, traffic, traffic.

That's how busy it is. So you're asking a pilot, some of whom have not gone through that kind of airspace, to not only see and be seen, visual flight rules, but they’re also sightseeing, looking at the Statue of Liberty. It's past time to get the small aircraft out of that space. They have LaGuardia at 1,100 feet above them. They have Newark Airport to the right. Too much congestion, too many airplanes.

END_OF_DOCUMENT_TOKEN_TO_BE_REPLACED 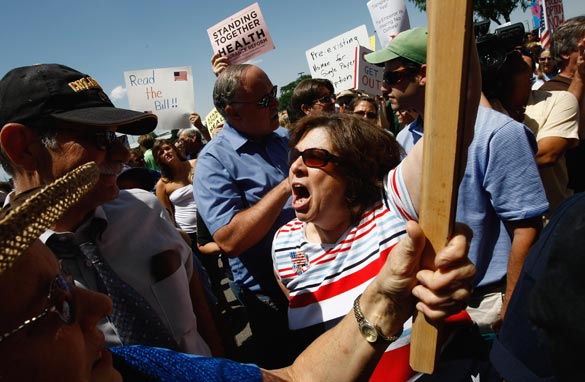 Several hundred people, both for and against health care reform, gathered to demonstrate on August 8, 2009 in Brighton, Colorado. (Photo by John Moore/Getty Images)

After a week of sometimes rowdy congressional town hall meetings on health care reform, the president wades into the superheated August recess debate. He's holding a town hall meeting here in Portsmouth where both sides of the issue are gearing up for dueling rallies outside of the event.

Here in New Hampshire last week, protesters descended on staff members of Democratic Senator Jeanne Shaheen who were holding a routing constituent services meeting. The meeting was not a town hall meeting. And the senator wasn't even there.

But she says one of her staff members needed a police escort to leave the meeting. Shaheen called the display "shameful." Just another sign that tensions are rising over health care reform.

Is the debate over health care going too far? Do Americans really want reform or is this just politics? What do you think?

Born on July 10, 1921, in Brookline, Massachusetts, Shriver was the fifth of nine children to Joseph P. and Rose Fitzgerald Kennedy. She emerged from the long shadow of siblings John F. Kennedy, Robert F. Kennedy and Sen. Edward M. Kennedy as the founder of the Special Olympics, which started as a summer day camp in her backyard in 1962.

Today, 3.1 million people with mental disabilities participate in 228 programs in in 170 nations, according to the Special Olympics.

Shriver's husband, R. Sargent Shriver, and her five children and their spouses and all of her 19 grandchildren were with her when she died, the Special Olympics said in a statement.

"We are tremendously grateful for the extreme outpouring of support and prayer from the public as we honor our beloved founder," Special Olympics President and Chief Operation Officer Brady Lum said Tuesday in a statement.

"Today we celebrate the life of a woman who had the vision to create our movement. It is an enormous loss, but I know we can rest assured that her legacy will live on through her family, friends, and the millions of people around the world who she touched and transformed."