Mapping the world, one street at a time

(CNN) - Between GPS devices on your car's dashboard and digital maps of almost any locale in the world on your smartphone or laptop, it's hard to get lost these days.

We may take these 21st-century services for granted. But someone still needs to do the actual legwork of mapping these places and making sure the information is accurate.

Meet the people at Tele Atlas, the company that provides so-called "base maps" to such high-profile clients as Google, MapQuest and RIM, the maker of the BlackBerry. Tele Atlas also provides digital-mapping services for its corporate owner, the portable-navigation company TomTom.

"Our ultimate goal would be to map the entire world," says Pat McDevitt, vice president of engineering at Tele Atlas, which is based in the Netherlands and has its U.S. headquarters in Lebanon, New Hampshire.

Base maps are the raw data - highways, streets, stop lights and exit signs - that navigation companies use as a starting point before adding their own applications.

Most of the industrialized world has been base-mapped already. But Tele Atlas is constantly updating pre-existing maps to include new roads, traffic signals and buildings.

Tele Atlas gets this information by combining satellite imagery, local, state and federal maps and most importantly, putting the rubber to the road in its Mobile Mapping Vans.

[cnn-photo-caption image= http://i2.cdn.turner.com/cnn/2009/POLITICS/08/12/congressman.swastika/art.swastika.cnn.jpg caption="Rep. David Scott's staff found a swastika on a sign outside his district office in Georgia."]

David Scott, a Democrat from north-central Georgia, told CNN he has received several offensive faxes and letters, including some with death threats and racial abuse.

Scott is black. His district includes part of metro Atlanta.

The congressman showed CNN a cartoon of Barack Obama, depicting the president as a clown with a swastika on his head, which Scott said he had received in the mail.

Tuesday, his staff found a swastika painted over Scott's name on a sign outside his office.

"I was just simply appalled," he said.

"This symbol represents the most heinous period in world history, indicative of man's greatest inhumanity to man, where nearly 6 million Jewish people and others were murdered purposely by Adolf Hitler," Scott said. "So when you reach that point ... this is very, very dangerous."

Local police and the F.B.I. are investigating.

Scott said he believes the swastika and hate mail are a result of the acrimonious health care debate.

[cnn-photo-caption image= http://i2.cdn.turner.com/cnn/2009/images/08/12/abrams.katy.cnn.art.jpg caption="Katy Abram, the mother whose comments drew attention at a town hall meeting, explains what got her so fired up."]

There has been a lot of rage and anger at the health care town hall meetings taking place across the country.

Katy Abram is a 35-year-old stay-at-home mom who showed up at Senator Arlen Specter’s town hall in Lebanon, Pennsylvania Tuesday. Her comments and questions struck a nerve with the audience, garnering a standing ovation.

Kiran Chetry: Did you know at the time when you showed up to ask the question that that would be the response from people in the crowd?

Katy Abram: No. I didn't even know that was the question I was going ask, to be honest with you.

Chetry: You said that you are a conservative and a Republican but not somebody who is really into politics, the day-to-day politicking out there. What made you change your mind when you told the senator “you’ve awakened a sleeping giant”? How did that happen?

Abram: Over the past couple months, I have seen on the news how they were doing the T.A.R.P. package and trying to bail out banks and auto companies, and I saw a lot of really reckless things and the next thing I see is the health care reform that they’re bringing through – nationalized health care. That really was the nail in the coffin for me, I guess you could say. That woke me up.

END_OF_DOCUMENT_TOKEN_TO_BE_REPLACED 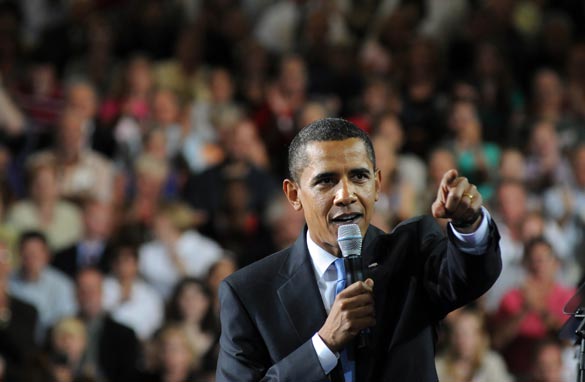 Outside the president's health care town hall in New Hampshire, a little girl held up a poster that said: "Obama lies, Grandma dies." When I asked the child's mother (who didn't want to give her name) what the sign meant, she struggled to find an answer.

But the sign was a reference to the false claim from some reform opponents – that Democratic proposals would set up a bureaucratic "death panel" that would determine when patients die. The president batted down the claim at his town hall – a more telling sign of just how tough the health care sell has become.

Are the health care town halls helping? How is the president handling the debate? What do you think?