American Morning’s Tuesday audience continued to express concern over health care reform with viewers remaining confused as to why President Obama and his administration apparently stepped back from supporting a public insurance option over the weekend.

It's the psychological wounds of war that may take the longest to heal.

The New York Times reports the Army plans to put all of its soldiers through intensive mental stress training. It's meant to improve combat performance but also help prevent depression, post-traumatic stress disorder and suicide.

In the second part of our "War at Home" series, our Dr. Sanjay Gupta reports on how soldiers are struggling to cope with life away from the front lines.

Expert: Iran is in a pre-revolutionary state

Three Americans hikers – Shane Bauer, 27; Sarah Shourd, 31; and Josh Fattal, 27 – were picked up by Iranian authorities when they strayed across the border while hiking in the mountains of Iraqi Kurdistan last month. They were arrested on allegations of entering Iran illegally from northern Iraq. Iran is now saying that they are spies.

Robert Baer is a former CIA field officer assigned to the Middle East and the author of “The Devil We Know: Dealing with the New Iranian Superpower.” He spoke to Kiran Chetry on CNN’s “American Morning” Tuesday.

Kiran Chetry: So we don’t know much about the condition of the three Americans detained in Iran. We know that they've been held there for about two weeks now. And we've heard very little about what's happened to them. They're up against courts being run by hardliners. They’re being accused of being spies. How dangerous is this situation for them?

Robert Baer: It's particularly dangerous because Iran, as we know, is going through a volatile situation. There's been a virtual military takeover. The regime is insecure. Clerics in Qom, the holy city, have attacked the regime. And I think we're going to - they're going to play hardball with these three guys. I mean, they're not spies. And so this could be drawn out for a very, very long time.

END_OF_DOCUMENT_TOKEN_TO_BE_REPLACED

CNN Truth Squad: No eye care until you're blind in one eye?

The Statement:
Florence Mackie of North Carolina writes to CNN, "I got a disturbing e-mail that said the new health bill would not help a person with macular degeneration until they lost the vision in one eye first." She asks, "Is this true?"

The facts and the verdict after the jump:
Read the rest of this entry » 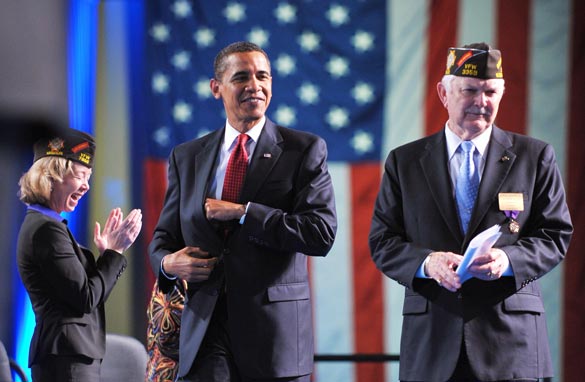