The War at Home: Sisterhood for military teens

In the third installment of our "War at Home" series we introduce you to two California teenagers who struggled to deal with their fathers' deployments to Afghanistan. They found a way to cope with the loneliness and isolation and now they're helping other girls – their military "sisters" – do the same.

As part of American Morning series on veterans returning home I recently visited New Directions, a homeless shelter program in Los Angeles that has been helping addicted and troubled veterans since 1982.

Across the country there are now about 130,000 homeless veterans, many from the Vietnam era, but tragically some back from serving in Iraq and Afghanistan have shown up on the streets. What we found is those who served in the Vietnam era are now reaching out a hand to the younger generation, doing what they can to make sure the youngest homeless vets get help.

If you saw our piece you might have noticed 60-year old Michael Anderson, a homeless vet who served in Vietnam from 1968 to 1972. He was sent to prison from 2006 to 2008 on domestic violence charges and while in prison began writing poetry—mainly about military service. At the end of this blog please take a moment to read “Where Broken Soldiers Go.” I think you will be amazed.

END_OF_DOCUMENT_TOKEN_TO_BE_REPLACED

Prof: Health care 'rationing' not as scary as it sounds

In the debate over health care reform, we keep hearing the word "rationing." For Republicans, it's been one of the top talking points. Senator Richard Shelby (R-AL) said, “…rationing is underlying all of this. …If you don't get health care when you need it, you know, ultimately it's going to affect your life.”

John Roberts: When you talk about rationing health care, what specifically is it that you mean?

So that means you’re going to have to say, look, at the margins, if there's a very expensive new treatment or new drug that perhaps doesn't do any good anyway – perhaps there's no good scientific studies that show it's going to help you significantly – we're not going to provide that. We're going to say, we want to get a certain standard of value for money, just like you would if you're shopping at the supermarket. That's rationing.

END_OF_DOCUMENT_TOKEN_TO_BE_REPLACED

We've heard all kinds of snarky, snide, and sarcastic remarks during health care town halls. They're just not usually coming from the member of Congress at the front of the room.

But last night Congressman Barney Frank got rather frank with some of his constituents in Massachusetts. CNN's Jim Acosta was in the room during the rowdy debate. 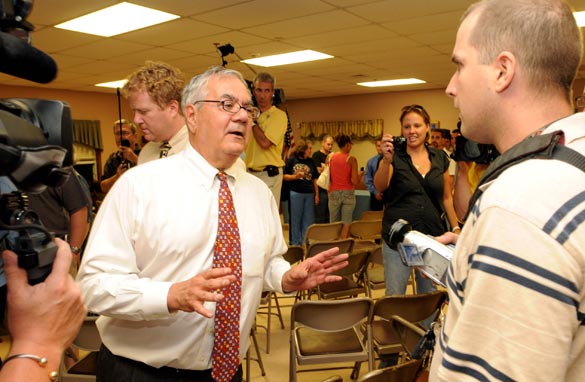