This week in our special series "The War at Home," we've seen how difficult it can be to make the transition back home after months, and in some cases years, on the battlefield.

We're starting to see the stress of long and repeated deployments reflected in the military divorce rate. CNN's Kiran Chetry had the chance to meet one couple whose marriage was pushed to the breaking point.

They're coming home from the front lines – in need of help from the government they fought to defend – and they're stuck, in a sea of red tape.

In our special series "The War at Home," our Pentagon Correspondent Barbara Starr looks at the backlog of claims at Veterans Affairs that has left hundreds of thousands of vets in limbo.

During the 2004 presidential race, many on the left accused the Bush White House of trying to use the politics of fear to get re-elected. That same claim is now coming from a former Bush insider.

America's first secretary of homeland security, former Pennsylvania Governor Tom Ridge, says in his new book that he was pressured to raise the nation’s terror alert level ahead of the election.

Kiran Chetry: In his book Ridge says, “Ashcroft strongly urged an increase in the threat level, and was supported by Rumsfeld. There was absolutely no support for that position within our department. None. I wondered, ‘Is this about security or politics?’” Fran, you were in the meetings. What is your recollection of how that whole conversation went down?

Frances Townsend: Kiran, I actually chaired the meeting and called it. Tom Ridge knew very well that I agreed with him that I didn't believe there was a basis to raise the threat level, but I knew there were others in the Homeland Security Council that did believe that and we agreed we'd have the conversation. By the way, what Tom Ridge's book doesn't say is the most eloquent case for not raising the threat level was not made by Tom in fact, it was made by Secretary of State at the time, Colin Powell. And Bob Mueller, at great personal risk – remember his boss John Ashcroft was advocating to raise it – based on the facts of the intelligence, Bob Mueller himself made an eloquent case not to raise it.

END_OF_DOCUMENT_TOKEN_TO_BE_REPLACED

Avlon: Hyper-partisan blast from the past

The health care debate continued to heat up with week. There was an eruption of wingnuttery on the left, as liberals went into reflexive protest mode against the Obama administration’s indication that they might support a bipartisan bill with a non-profit co-op instead of a public option.

On the right, rock-ribbed partisans are devoted to doing whatever they can to derail Obama’s health care reform in any form. They share a my-way-or-the-highway approach to politics that condemns compromise and denies the concept of common ground.

This week’s Wingnuts are two hyper-partisan blasts from the past who’ve emerged from semi-retirement in an unwelcome attempt to reinsert themselves into the national debate – Cindy Sheehan and Tom DeLay.

On the left, Cindy Sheehan has announced her intention to protest President Obama on his summer vacation in Martha’s Vineyard, according to the Washington Examiner. Sheehan was a far-left fixture a few years ago, protesting then-President George W. Bush outside his ranch in Crawford, Texas. Now she’s back because the wars in Iraq and Afghanistan haven’t stopped per her instructions. Here’s a partial list of her demands:

END_OF_DOCUMENT_TOKEN_TO_BE_REPLACED 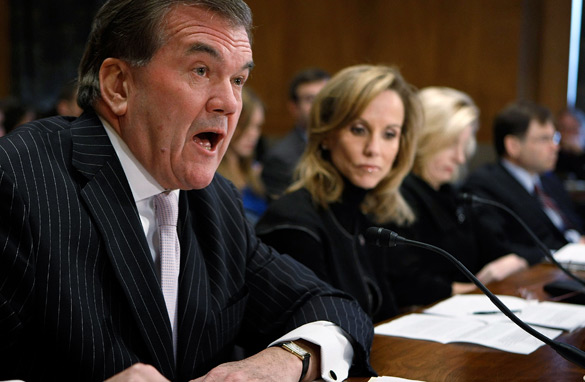