(CNN) - Worldwide tributes for U.S. Senator Edward Kennedy, who has died after a long battle with brain cancer, poured in Wednesday, led by politicians hailing his role in securing a lasting peace in Northern Ireland.

Former British Prime Minister Tony Blair, whose administration presided over the 1998 Good Friday Agreement which led to an end to decades of sectarian violence in the province and established a united ruling Assembly, praised Kennedy's commitment to the process.

"I saw his focus and determination first hand in Northern Ireland where his passionate commitment was matched with a practical understanding of what needed to be done to bring about peace and to sustain it," Blair said.

Kennedy, of Irish Catholic ancestry, was initially an outspoken opponent of British military deployment to the province during the violence of the 1970s and 80s in which more than 3,600 people were killed, but later moderated his views to support negotiations that brought all sides to the table.

The senator is credited with getting an American visa for Gerry Adams - leader of the pro-Irish nationalism Sinn Fein party accused of links to Irish Republican Army militants - allowing him to attend a pivotal U.S. conference on Northern Ireland's future. 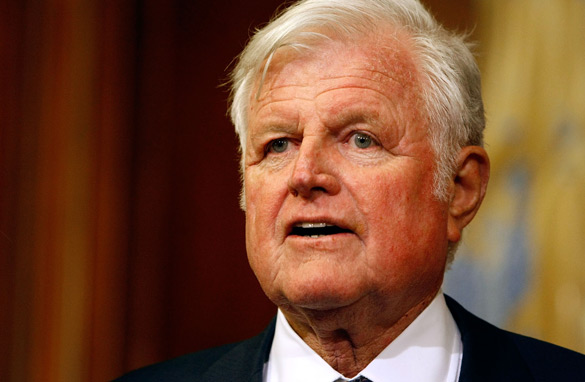 (CNN) - Massachusetts Sen. Edward Kennedy, the patriarch of the first family of Democratic politics, died late Tuesday at his home in Hyannis Port, Massachusetts, after a lengthy battle with brain cancer. He was 77.

"We've lost the irreplaceable center of our family and joyous light in our lives, but the inspiration of his faith, optimism and perseverance will live on in our hearts forever," a family statement said. "We thank everyone who gave him care and support over this last year, and everyone who stood with him for so many years in his tireless march for progress toward justice."

In a statement, Obama says: "An important chapter in our history has come to an end. Our country has lost a great leader, who picked up the torch of his fallen brothers and became the greatest United States Senator of our time."

Breaking news this morning:
Sen. Ted Kennedy has died at the age of 77.

Stay tuned to a special edition of American Morning for full coverage of this developing story. We are speaking to special guests all morning about Kennedy's life and career. We're utilizing the worldwide resources of CNN to bring you the latest information.