Editor's Note: Monday’s American Morning story on the SATs garnered divided response, as some felt such standardized tests were nothing more than a barrier to higher education. Others believed the tests were important to help maintain a higher standards for educational institutions.

How do you feel about the SATs? Are they useful or outdated? What has your experience been with the SAT and other standardized tests?

Grow your own. It seems everyone's doing it now. The number of fruit and vegetable gardens in the U.S. has exploded as Americans look to save money during the recession. CNN's Christine Romans takes a look at how gardening has become such a hot hobby.

A profit for taxpayers from the bank bailout? Could it be? So far, yes.

The Treasury Department has netted $79 billion in repayments, interest and dividends from the controversial Troubled Asset Relief Program passed into law almost a year ago. TARP is the acronym for the unpopular bank bailout that many thought was a boondoggle for greedy banks and a travesty for taxpayers.

But the Treasury Department says taxpayers, so far, are earning a return on that controversial investment. How much? We asked Treasury to break down the numbers for us:

Also, Chrysler Financial has repaid its loan of $1.5 billion. On paper, at least, taxpayers have earned a tidy profit from the rising stocks of AIG, Citigroup and Bank of America, but the future of taxpayers' investment in those firms is far from certain. Losses on debts backed by the government for those institutions could swamp any profits at all. And huge cash infusions for GM and Chrysler to sustain them through their bankruptcies will not be repaid.

The situation for the banks is complicated. On the same day the New York Times front-page carries a story titled, "As Banks Repay Bailout Money, U.S. Sees Profit," the Wall Street Journal carries its own front-page story: "Raft of Deals For Failed Banks Puts U.S. on Hook for Billions."

Both are true. Yes the taxpayer is earning interest on its bank investments through the bailout and yes healthy banks are repaying the government for their investment. But at the same time, the banks that are failing are being sold off in some cases with guarantees that the taxpayer will backstop future losses tied to bad debt. Some 84 banks have failed so far this year and the FDIC has 416 banks on its troubled bank list.

Many analysts expect more bank failures in the months ahead. Indeed, banks could struggle and fail for two or more quarters after a recovery takes hold. Stay tuned. Nothing is simple and the outlook is treacherous for the banking industry. For now we'll take those dividends and profits, but it does not mean the banking problems are over.

Life after being kidnapped

We're learning more today about what life was like for Jaycee Dugard during the 18 years that she spent with her alleged kidnappers. This past weekend she was reunited with her family, but there are still many unanswered questions about the case.

Ernie Allen is president and CEO of the National Center for Missing and Exploited Children. He spoke to Kiran Chetry on CNN’s “American Morning” Monday about what life is like after a kidnapping and what needs to be done to prevent these crimes.

Kiran Chetry: There's so much to talk about in this case. Certainly there’s cause for celebration on the part of the family that after thinking their daughter was probably dead they find out that she is alive and are reunited with her.

But at the same time there’s so much tragedy involved. She had two children while being held prisoner for 18 years. What are the most important things that need to be kept in mind now as she’s starting to reintegrate with her real family?

Ernie Allen: Well, I think the most important test here is the need for patience. So often parents had these children frozen in their minds as a 10- or 11-year-old and everybody wants to go back to where they were. This is going to be a journey, a long process. This is going to be a process of life-long recovery for Jaycee. But she’s alive. There's hope for the future. She's young. We're very encouraged about the steps that are happening already.

Allen: Well, that's another challenge. And it represents really a two-sided picture. One is to these children he's their father. You can't suddenly go from dad to Satan to this evil person. So that's going to be very sensitive. The other thing is, apparently the children have been very sheltered. They’ve never gone to school. They had never seen a doctor before. But our hope here is that Jaycee will be a mom and that it will help her in her care for them as she goes forward.

END_OF_DOCUMENT_TOKEN_TO_BE_REPLACED

The Department of Veterans Affairs has "a manual out there telling our veterans stuff like, 'Are you really of value to your community?' You know, encouraging them to commit suicide."

The Truth-O-Meter says: PANTS ON FIRE

Health care bill does not 'force' employers to drop coverage

"Any government-run 'public' plan ... forces more employers to drop employee coverage due to rising costs and pay an additional 8% payroll tax for each worker."

Boxer claims that it costs $1,100 per person to cover the uninsured

"It's costing every American who is insured $1,100 to pick up the cost of uncompensated care that goes on at the emergency room."

-Barbara Boxer on Monday, August 10th, 2009 in an interview with Rachel Maddow

Read more: There's some dispute over the "hidden health tax" 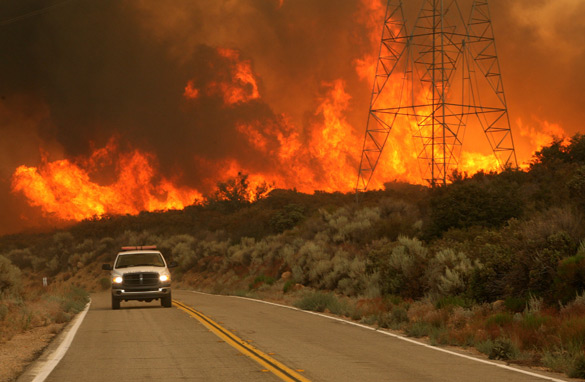 A firefighter drives away from a wall of flames August 30, 2009 in Acton, California. (Getty Images)