Editor's Note: The sons of late Sen. Edward Kennedy, Patrick and Ted Jr., will be guests on "American Morning" Tuesday. Below is an excerpt of Sen. Kennedy's memoir, True Compass, which is on sale now. 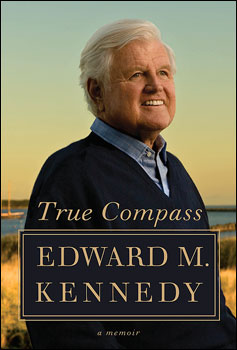 It was on the sunny spring day of Tuesday, May 20, 2008,
that I emerged from a medicated drowsiness in a Boston
hospital bed and looked up into the face of a doctor who
explained to me in a somber way that I was about to die,
and that I had best begin getting my affairs in order and
preparing my friends and family for the end.

As I lay in that hospital bed, my friends and neighbors on
Cape Cod were just then getting their boats ready for the
summer cruises and races. I intended to be among them,
asusual. The Boston Red Sox were a good bet to defend
theirworld championship. There was a presidential primary
campaign in progress. My Senate colleagues were pushing
forward on our legislative agenda. I had work to do.

No. As much as I respect the medical profession, my demise
did not fit into my plans.

I was hardly “in denial” that I faced a grave and shocking
threat to my life. The first symptoms of what would prove to
be a malignant brain tumor had struck me three days earlier.
They’d descended on me as I padded toward the kitchen of the Hyannis Port house that has been the center of my life and happiness for most of my seventy-six years. I was intent on nothing more than taking Sunny and Splash, my much-loved Portuguese water dogs, for their morning walk. My wife, Vicki, and I had just been chatting and having our morning coffee in the sunroom.

(CNN) - An audio message purportedly from al Qaeda leader Osama bin Laden has accused President Barack Obama of being unable to fulfil his election pledge to pull U.S. troops out of Iraq.

[cnn-photo-caption image= http://i2.cdn.turner.com/cnn/2009/WORLD/meast/09/14/binladen.message/art.obl.filer.gi.jpg caption="Osama bin Laden is seen in an image taken from a videotape that aired on Al-Jazeera in September 2003."]

"To the American people, this is my message to you: a reminder of the reasons behind 9/11 and the wars and the repercussions that followed and the way to resolve it," the message said.

"From the beginning, we have stated many times ... that the cause of our disagreement with you is your support of your allies, the Israelis, who are occupying our land in Palestine. Your stance along with some other grievances are what led us to carry out the events of 9/11."

The video plays the audio over a undated photograph of bin Laden. The video also shows a banner with the American flag as the backdrop and an image of the New York City skyline with the twin towers of the World Trade Center - destroyed in the 9/11 attack - still standing, said terrorism analyst Laura Mansfield.

CNN could not independently authenticate bin Laden as the speaker in the 11-minute video posted on Sunday by As-Sahab Media - al Qaeda's production company. Watch CNN's Octavia Nasr's analysis of the message

NEW YORK (CNNMoney.com) - Reports of the stock rally's demise have been greatly exaggerated, with September so far managing to eschew a much-predicted selloff. A torrent of economic news this week could turn the tide.

On the economic front, the consumer will remain front and center: Reports are due on inflation, retail sales, housing and jobless claims. These reports are key as investors look for signs that the consumer - hit by rising joblessness, lost wealth and tighter credit - is starting to recover.

Consumer spending fuels two-thirds of economic growth. Government stimulus and a period of inventory building are expected to help the economy for the next few quarters, but experts say the U.S. is at risk for a double-dip recession by this time next year if spending doesn't return.

"The week is likely to be a competition between better economic news for August and the start of the quarterly pre-announcement period," said John Canally, Economist at LPL Financial.

President Barack Obama defended his health care plan in a speech to a joint session of Congress, promoting the benefits of reform for those who already have coverage.

One of those benefits, he said, is that insurers will be required to cover checkups and other preventive care.

"Insurance companies will be required to cover, with no extra charge, routine checkups and preventive care, like mammograms and colonoscopies — because there’s no reason we shouldn't be catching diseases like breast cancer and colon cancer before they get worse," Obama said. "That makes sense, it saves money, and it saves lives."

It may make sense and save lives, but does it save money? Experts say no.

Read more: Covering preventive care for everyone is a net cost

As a candidate, President Obama "declared that everyone deserves access to reproductive health care that includes abortion, and vowed that this 'right' would be at the heart of his health care reform plan if elected president."

-John Boehner on Thursday, September 10th, 2009 in a statement from the Minority Leader's office

The Democratic health care bill in the House would "create 53 new government bureaucracies."

Read more: Not that many

Here are the big stories we'll be breaking down for you this morning:

Brand new developments surrounding the case of missing Yale graduate student Annie Le – It is now a homicide investigation. Police say a body believed to be that of Le was found stuffed inside a wall at the research lab where she went missing last week. (Full story)

An audio message believed to be from Osama bin Laden has surfaced on radical Islamic Web sites. For 11 minutes, the terror mastermind lashes out at President Obama – calling him "powerless". There are also references to former President Bush and former Vice President Cheney. Our Senior Middle East Affairs Editor Octavia Nasr will give us some insight on this development. (Full story)

And it was one year ago, Lehman Brothers collapsed – sending the world's economy into a financial free-fall. Today, President Obama marks the occasion with a trip to New York. He'll deliver a major speech on the financial meltdown in the heart of Wall Street. The best political team on television is standing by with more on today's speech. (Full story)

RT @dinahaddie: So wait, what happens to all of us Emotional Support Canadians after tomorrow?
alivelshi

5:51 pm ET January 20, 2021 RETWEET
RT @JoyceWhiteVance: It turns out that crowd size at an inauguration has nothing to do with the character of the incoming president.
alivelshi

11:50 am ET January 20, 2021 RETWEET
3/3 “The first thing we have to do is pay our respects and our love to the incredible people and families who sufftwitter.com/i/web/status/1…JsA7
alivelshi

9:28 am ET January 20, 2021 RETWEET
2/3 “So it's really, you could say, we built it twice. And you're gonna see incredible numbers start coming in, iftwitter.com/i/web/status/1…H0EO
alivelshi