Editor's Note: In spite of President Obama’s declaration earlier this week of a “national emergency” to address the H1N1 influenza virus, many watching Thursday’s "American Morning" were wary of the “hype.”

Has the H1N1 virus affected you or your family? Is it a “national emergency’ when ERs are overloaded, or is this common for the season?

The Dallas police apology to those ticketed for “driving while not speaking English” concerned some viewers, who worried that these drivers were unable to read English as well: "Kinda scary to me…I do not think she should be driving at all if you can not read the traffic signs."

How do you feel about being on the road with drivers who may not be able speak English?

With a shortage of the H1N1 vaccine, some local health officials are being forced to act as vaccine police. Health officials in Los Angeles County feel they need to question the masses of people waiting in line at public clinics to ascertain if patients have a real need for the vaccine.

Dr. Jonathan Fielding, director of public health for Los Angeles County, is the county’s top public health official, and has worked those vaccine lines. He spoke to Alina Cho on CNN’s “American Morning” Thursday. Below is an edited transcript of that interview.

Alina Cho: Before we get to what's happening on the ground there, I want to remind our viewers – and some people may not know – you're vaccinating people on what's being called a priority list right now. Remind everybody, who should be standing in line to get the vaccine right now and who should wait.

Jonathan Fielding: Yes, the ones who should be in the priority groups are pregnant women or anybody caring for a child under six months of age, health care workers, emergency medical service workers, children and young adults from 6 months up through 24 years, and those 25 to 64 who have underlying conditions that would put them at higher risks for the complications of this H1N1 novel strain.

END_OF_DOCUMENT_TOKEN_TO_BE_REPLACED

Who's got their hands in your 401k? People could be dipping into your retirement and you may not know it, until you retire … thousands of dollars lighter. Our Gerri Willis shows us how we're being Nickel & Dimed with hidden 401k fees.

New version of health care bill due out

This version would allow doctors to negotiate reimbursement rates with the federal government, the aides said Wednesday.

The proposal would be a blow to Speaker Nancy Pelosi, who has argued for a more "robust" public option, one that ties reimbursement rates for providers and hospitals to Medicare rates plus a 5 percent increase.

But Pelosi and other Democratic leaders, after a week of canvassing rank and file Democrats, appear to be bowing to the reality that her preferred approach does not have enough votes. Instead, the more moderate version, favored by rural and moderate members, appears to have the most support among House Democrats.

One Democratic aide told CNN that "the votes aren't there for robust public option, so that means we're looking at the other form of the public option."

(CNN) - The flag-draped cases of at least 18 Americans killed in Afghanistan arrived at Dover Air Force Base in Delaware early Thursday, government and military officials said.

President Obama, who arrived at Dover Air Force Base on Marine One, along with U.S. Attorney General Eric Holder and acting DEA Administrator Michele Leonhart, witnessed the transfer of the bodies, according to the Justice Department. 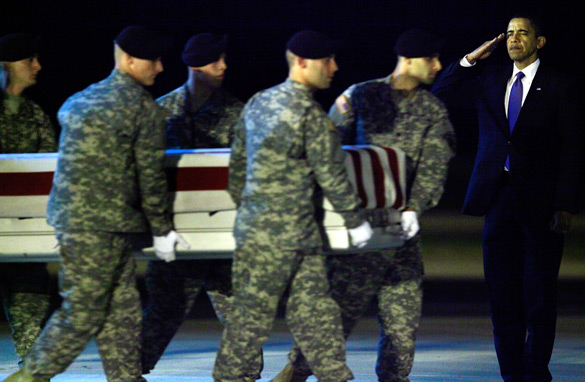 President Barack Obama salutes as a US Army carry team moves the transfer case of US Army Sgt. Dale R. Griffin, during a dignified transfer at Dover Air Force Base on October 29, 2009 in Dover, Delaware. (Getty Images)

The DEA agents were returning from a raid on a compound believed to be harboring insurgents tied to drug trafficking when their chopper with seven troops aboard went down in western Afghanistan. Read more