When it comes to childhood vaccines controversy and confusion have been a big part of the equation for many parents. Now a study by the Centers for Disease Control reveals from 2000 to 2008 the number of kids vaccinated against illnesses like measles, mumps and polio has increased.

The NBA commissioner is coming down hard on Wizards star Gilbert Arenas. The league suspended him indefinitely without pay for bringing guns into the locker room.

It willl cost Arenas $147,000 for each game he misses. He's also under investigation and could face charges.

Is that enough to get the players' attention? We discussed the matter on Thursday's American Morning with "In Session" host and sports attorney Ryan Smith.

(CNN) - The terrorist threat posed by radicalized Muslim- Americans has been exaggerated, according to a study released Wednesday by researchers at Duke University and the University of North Carolina at Chapel Hill.

A small number of Muslim-Americans have undergone radicalization since the September 11, 2001, terrorist attacks on New York and Washington, the study found. It compiled a list of 139 individuals it categorized as "Muslim-American terrorism offenders" who had become radicalized in the U.S. in that time - a rate of 17 per year.

That level is "small compared to other violent crime in America, but not insignificant," according to the study, titled "Anti-Terror Lessons of Muslim-Americans."

To be included on the list, an offender had to have been wanted, arrested, convicted or killed in connection with terrorism-related activities since 9/11 - and have lived in the United States, regardless of immigration status, for more than a year prior to arrest.

Of the 139 offenders, fewer than a third successfully executed a violent plan, according to a Duke University statement on the study, and most of those were overseas. Read the full story »

Editor's Note: Below is a list of six well-known offenders excerpted from the Duke study. 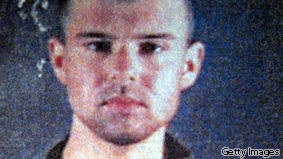 END_OF_DOCUMENT_TOKEN_TO_BE_REPLACED

Today the president will give the public an idea of how suspected terrorist Umar Farouk AbdulMutallab slipped past post-9/11 airline security and nearly pulled off an attack on a Christmas Day Northwest Airlines flight.

The White House plans to release an unclassified report on what went wrong and reveal new steps intended to thwart terrorist attacks in the future.

On Thursday's American Morning we discussed what the report may show with the former director of national intelligence, Ambassador John Negroponte.

Arctic blast moves south, much of nation below freezing

(CNN) - A snowstorm backed by bone-chilling cold began to push into the Deep South on Thursday, re-enforcing record-low temperatures well into Florida.

A days-long cold spell eased some on Wednesday, but for much of the nation, even lower temperatures are on the way through the weekend. Record-breaking lows are forecast for two-thirds of the country, for most areas east of the Rockies.

The arctic blast that began over the weekend has been blamed for at least seven deaths across the nation.

CNN meteorologist Rob Marciano said some areas in the South will have slightly warmer temperatures on Thursday before it cools off even more. He traveled to Memphis, Tennessee to find out just how cold it really is.

'Mayor' of Skid Row on mission to rehabilitate homeless refuge

It's a haven for crime and the homeless sitting just blocks away from a downtown metropolis. They come from all walks of life after hitting rock bottom and having nowhere else to turn. This is Skid Row in Los Angeles.

"Not only are the people homeless, they're hopeless," says Skid Row resident and activist Jeff Page. Three years ago after his career as a rap promoter fizzled and he ran out of money and options, Page made the difficult decision to move to Skid Row. When he arrived a mission for the homeless became his new home.

Once he spent some time on Skid Row, the reality of the place began to resonate. "To actually be in the community for a long extended period of time and actually see day after day after day the living conditions of the people here and how deplorable the conditions were," says Page, "it really started to sink home how close I was on that fine line to becoming one of them."

Page launched a one-man campaign to turn not only his life, but also his new world around. Starting small, he became the self-appointed security guard for his mission. After getting positive feedback from residents, he took his ambitions to the streets.

He started organizing street clean-ups and mural paintings and getting the community involved with his cause. He eventually founded his group, "Issues and Solutions." Immersing himself in the Skid Row community, Page developed a reputation as a person you could approach with a problem and no matter how big or small, he would listen and try and help. That helped him earn his nickname, "General Jeff."