Editor's Note: On Monday, as Congress continues to grapple with proposed health care reform, American Morning’s audience zeroed in on health care waste. Many thanked CNN for the investigative series, while sharing solutions as well as their own health care horror stories.

What do you think? Is there a better way to prevent waste in the health care system? Continue the conversation below.

(CNN) – 911 calls can show us how lives were saved, and sometimes how they could have been saved. Now, several states are considering laws that would keep the public from hearing the recordings.

Does a caller's right to privacy trump your right to hear it?

Susan Howley, spokesperson for the National Center for Victims of Crime, supports banning the release of the calls. David Cuillier, chairman of the Society of Professional Journalists' Freedom of Information Committee, says releasing emergency calls can do a public service. They debated the issue with us on Monday's American Morning.

Editor’s note: John P. Avlon is a senior political columnist for The Daily Beast and author of "Wingnuts: How the Lunatic Fringe is Hijacking America." Previously, he served as chief speechwriter for New York City Mayor Rudy Giuliani and was a columnist and associate editor for The New York Sun. 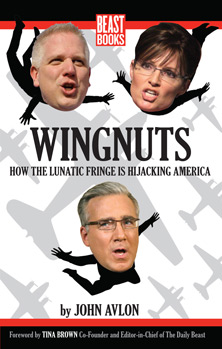 (CNN) – CNN independent analyst John Avlon is the author of a new book called, “Wingnuts: How the Lunatic Fringe is Hijacking America."

Avlon is no stranger to viewers of CNN’s “American Morning.” He joins the program on Fridays for his weekly “Wingnuts of the Week” segment.

According to Avlon, a wingnut is someone on the far-right wing or far-left wing of American politics. In a polarized two-party system, he says, wingnuts have a disproportionate influence and too often define the terms of debate.

On Monday March 15, Avlon will discuss “Wingnuts” at Strand bookstore in New York City. He will be joined by American Morning anchors John Roberts and Kiran Chetry. The event is free and open to the public.

Editor's Note: 1.5 million letters were sent to Jacqueline Kennedy after JFK's assassination in 1963. Author Ellen Fitzpatrick's new book, "Letters to Jackie,” highlights 250 of those condolences. It is published by Ecco and goes on sale at bookstores March 2, 2010.

(CNN) – The 1963 assassination of President John F. Kennedy was an act of violence that shocked the collective American conscience, sparking an outpouring of grief that transcended racial and economic lines.

That grief has now been cataloged by historian Ellen Fitzpatrick in a new book, "Letters to Jackie," a first-ever compilation of some of the 1.5 million condolence letters the first lady received after Kennedy's death.

Most of the letters were originally destroyed by the National Archives, which felt it would not have enough room to store them. Fitzpatrick combed through more than 15,000 of the remaining letters at the JFK Presidential Library and Museum in Boston, to choose 250 for the book.

"The letters that were most compelling to me were ones that encapsulated some sense of Kennedy as a president, or it was someone who had something very powerful to say about the day of the assassination … or someone who talked about an experience with grief in their own life," said Fitzpatrick.

There was also great diversity among the letter writers.

"I am but a humble postman," wrote Henry Gonzales. "Please try to find it in your heart that we Texans of Mexican origin love all of you."

Henry Gonzales emigrated from Mexico to Texas with his parents at the age of two. After serving in the U.S. Army during World War II, he joined the U.S. Postal Service. (Photo scan courtesy the JFK Presidential Library and Museum)

END_OF_DOCUMENT_TOKEN_TO_BE_REPLACED

(CNN) – He's about to become the sixth host in the history of the "Tonight Show," and he was also the fourth.

Tonight, Jay Leno makes his return to late night after a PR disaster that saw NBC kick Conan O'Brien to the curb. The big question is, even though Jay is back, will his audience be? Our Kareen Wynter has the report.

Editor's Note: All this week, in the American Morning original series "Health care – Prescription for waste," we're examining more waste in the health care system – and this time it could involve your money. Today, a medical billing advocate shows our Elizabeth Cohen some of the wasteful charges she's seen in bills. And tomorrow on American Morning, we go shopping for health care to show you how you can save hundreds when it comes to your own medical bills.

(CNN) – Imagine someone spending a thousand bucks for a toothbrush. It might be amusing – if it wasn't your money. Consider this: for every dollar we spend on health care, fifty cents is wasted.

Our senior medical correspondent Elizabeth Cohen shows us just how expensive some medical accessories can be and whether you’re getting slammed with bogus bills.